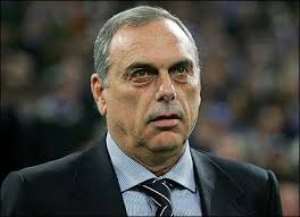 The Ghana Football Association says it is not worried at all about the nationality of coach Avram Grant who is likely to  be appointed as Black Stars coach.

The FA president Kwasi Nyantakyi at a press conference in Accra on Friday said the interview panel was impressed with the output of Avram Grant and would appoint him if salary negotiations with the former Chelsea boss go well. If not, Juan Ignacio Martínez who came in second in the interview may just be appointed.

But even before the FA will take a final decision, media reports claim the fact that Avram Grant holds an Israeli passport may hinder his work.

Israel has been in a protracted diplomatic row with Palestine and other north African countries with the critics claiming, Grant may not be given visas to these countries if he were to be appointed as Ghana coach.

But the FA spokesperson Ibrahim Saanie Daara in an interview with Myjoyonline.com dismissed the assertion.

He said the FA never had an issue with the nationality or the passport of Avram Grant.

Daara said the FA is a signatory to FIFA rules and regulations which respect the nationality, race and ethnicity of all its members or persons appointed by the members.

He said in the case of Avram Grant, he even has an Iraqi mother, which means he "satisfies both ends of the divide."

On the issue of salary, Sannie Daara said the FA is yet to agree personal terms with the former Chelsea boss.

According to him, issues of salary were raised during the interview but would not give further details except to say that a final meeting would be held during which a decision would be made.

Saif Rubie, agent for Avram Grant also told Myjoyonline.com his client "has done humanitarian work in Syria in recent months and was also a speaker at the Soccerex Asia in Jordan, in April" and has no diplomatic issues.

He found it ridiculous that his client would be given visas for his personal events but would be denied visas for an international assignment when he is appointed Ghana coach.

He found it strange reports that the former Chelsea boss was demanding $150,000 monthly salary before he would take the  Black Stars job.

Saif Rubie said Grant is yet to meet with the FA to discuss the conditions of service but hinted the ex-Portsmouth coach is not in for the money, saying, he worked for Portsmouth for over six months without being paid any salary.

He said Grant is looking forward for a successful coaching experience with the Black Stars.