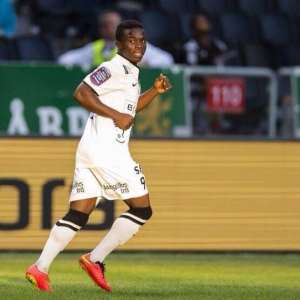 Okrah has returned to his club Bechem United after an ill-fated four-month loan spell with Swedish top-flight side BK Hacken.

But his disappointing spell has been put down to injuries and not because he lacked the quality to excel in Europe.

GHANASoccernet.com understands the player signed a lucrative deal with Omdurman-based side which could see him earn US$ 20,000 a-month as salary.

“I can't talk about figures at this point in time but all I can confirm is that the player has signed a two-year deal which is good for him and his club Bechem United,” Okrah's agent Oliver Arthur exclusively told GHANASoccernet.com.

“We have no doubt that he is excel in Sudan and it will be wrong for anybody to think because of his hard luck in Sweden he will fail. We all know injuries affected him and not because he's not good.”

Okrah, 21, is the reigning Ghana Premier League Most Valuable Player and top scorer with 16 goals in the 2013/2014 season.

The 2015 Sudanese Premier League will start in January and Al Merreikh will be hoping to wrest the title from Al Hilal who beat them with just one point.