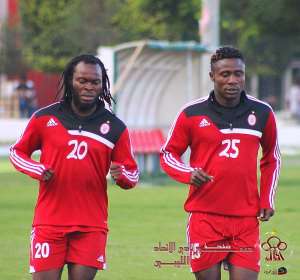 The pair look to have joined the club recently and are looking to pick fitness to match the level of their first-team squad.

Yahaya Mohammed
Yahaya is a free agent after leaving Ghanaian champions Asante Kotoko last season, following the expiration of his contract with them.

Yahaya Mohammed with Nuru Sulley
Nuru Sulley returned to Hearts of Oak following the crisis in Libya after signing for a Libyan top-flight outfit but the delays in the commencement of the Ghanaian Premier League has forced him to leave.

Yahaya Mohammed training with an unnamed club
Yahaya Mohammed at new club
Both players were regular for Ghana at the 2014 CHAN tournament in South Africa where the local Black Stars won silver.