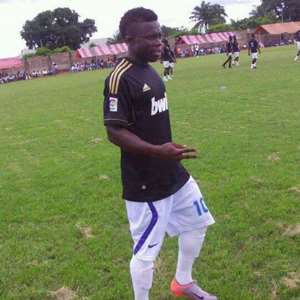 [caption id="attachment_271692" align="aligncenter" width="417"] Augustine Okrah[/caption] Kotoko's desire to strengthen their squad with Augustine Okrah, has backfired as Bechem United are unwilling to release the reigning Premier League Player of the Year to any local side. Okrah, however, could be heading to another European team, after his Swedish club, BK Hacken, terminated his loan deal due to recurrent injuries.Reports were rife that the Premier League giants were plotting a move for the striker to strengthen their domestic and continental campaigns in the coming season.But the owner Bechem United, Kingsley Owusu-Achau, told the Graphic Sports on Tuesday that a return to the local league by the striker was out of the question as the club were negotiating a different deal for the player.He said, immediately after recuperating from a waist injury, the striker hurt his knee which kept him away from active play and therefore left the Swedish club owners very disappointed.The injuries, Mr Owusu-Achau said, raised suspicion among BK Hacken officials about the player's fitness although he had passed the medical test before his loan spell.Unfortunately, Hacken terminated the contract just when the club were supposed to honour their financial obligations to Bechem United.A offer to sign Okrah with a lower division side in Sweden and be later transferred to a bigger club after ragaining full fitness, was objected to by Okrah's managers, the Graphic Sports learned.