Ebola Crisis: AFCON 2015 decision is not just about football 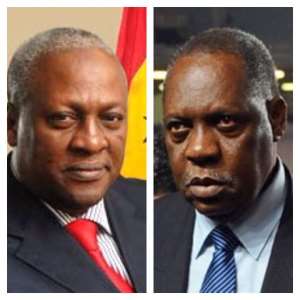 It is now inevitable that there is one fact all stakeholders in world football especially on the African continent have to accept.

The final decision to host the 30th edition of Africa's biggest soccer gathering no longer resides in the domain of the Confederation of African football (CAF), Ghana or South Africa.

The irony that Ghana is now being asked to consider hosting the Afcon in January cannot be lost on President Mahama who would have cautioned his Sports Minister Hon Ayariga, that any decision on the tournament must be taken beyond an African football perspective but ultimately in Africa's wider best interests.  This is a perfect opportunity for Ghana to lead the clarion call for more support, logistics and more urgency in dealing with the Ebola menace.

From all indications, the World Health Organisation's next updated report on Ebola will determine win which direction football in Africa will go for at least the next three months. That report will be handed over to FIFA Chief Medical officer Michel D'Hooghe next week. With the epidemic far from being under control, there is unlikely to be a rush to go ahead with any tournament in Africa, let alone West Africa in the next 90 days.

So where does that position Ghana? Realistically Ghana is still keen to host Afcon 2017 in just over two years from now. It would give the country the necessary time and breathing space to test all faculties earmarked for the continental showpiece.

Just a few weeks ago at the Health Partners Coordinating Committee meeting in Abuja Nigeria,  the President of the ECOWAS Commission, Kadre Quedraogo, described the Ebola Virus epidemic as a security issue, saying it is not an issue for one country but a regional concern.

For now, all indicators point to South Africa getting the nod to step in as emergency hosts if Morocco confirm and insist on their stand to Caf for a postponement.

The South African option carries less risk and has been proven as was the case for Afcon 2013.

Few would dispute that the South Africans are capable of a robust countdown in 75 days. But is that the priority?

The country's Sports and Recreation Minister Fikile Mbabula has received an identical letter presented to Ghana FA President Kwesi Nyantakyi and forwarded to Youth and Sports Minister Mahama Ayariga. Senior government and football   officials in both countries are expected to convene today and over the weekend in the hope of taking a final decision.

There is nothing wrong with rousing the rest of the world to sit up and address the issue through the power of football. Indeed, with ebola dominating the global news headlines, Ghana must show wise and strategic leadership and must ONLY accept to "standby" to host Afcon 2015 as a positive gesture of leadership to draw the rest of the world to invest in the health infrastructure of West Africa.

Another consideration that Ghana's President Mahama is also Ecowas Chair means that he is not faced with a simple yes or no football decision. That would explain why Ghana has wisely chosen not to scream an outright no. Mahama is in constant touch with US President Barack Obama and British Prime Minister David Cameron.

With a coordinated rather than a singular view of the crisis, any decision on Ebola would certainly need the nod of the big boys in global affairs. Thankfully for the Ghanaian President, they need him as much as he needs them.

Not surprisingly, the Ghanaian media is divided as to which way to go obviously due to various interests. But that will only confuse the ordinary man in the street who must be educated and not bombarded with panic-reportage. What is absolutely clear is that regardless of the arguments for and against hosting Afcon in any country next January, ''global health security'' and not football reasons will determine the final outcome.