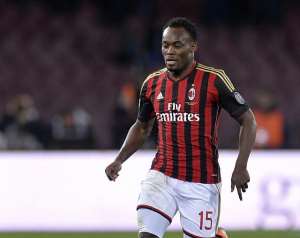 AC Milan will offer Ghana midfielder Michael Essien to Zenit St Petersburg as part of a bid for defender Domenico Criscito, according to reports.

According to MilanNews.it, Essien among four players the club would be willing to trade to Zenit in their proposal for the Italian defender's services to strengthen their back line this summer.

Other players likely to be included in the deal are Ignazio Abate, M'Baye Niang and Cristian Zapata.

Zenit have Criscito at around €12 million and the Rossoneri would be looking to unload one of their men in order to decrease the price tag of the former Genoa man.

Criscito scored one goal and provided three assists in his 18 league appearances for the Russian side last term.