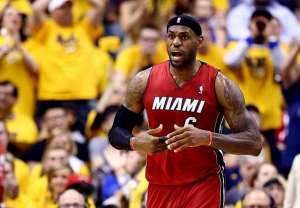 James is returning to the Cleveland Cavaliers four years after he left his home state for the Heat, with whom he won two NBA titles.

The Heat, who appear likely to retain Dwyane Wade and Chris Bosh, are eager to move on from the superstar 29-year-old.

In a statement, Riley said the Heat would be strong even without James, pointing to their record of three championships, five conference and 11 division titles.

"Over the last 19 years, since [owner] Micky [Arison] and I teamed together, the Miami Heat has always been a championship organisation; we've won multiple championships and competed for many others," he said.

"Micky, [coach] Erik [Spoelstra] and I remain committed to doing whatever it takes to win and compete for championships for many years to come.

"We've proven that we can do it and we'll do it again."

While disappointed, Riley said he understood James' decision to return to the Cavaliers.

"While I am disappointed by LeBron's decision to leave Miami, no one can fault another person for wanting to return home," he said.

"The last four years have been an incredible run for South Florida, Heat fans, our organisation and for all of the players who were a part of it.

"LeBron is a fantastic leader, athlete, teammate and person, and we are all sorry to see him go."