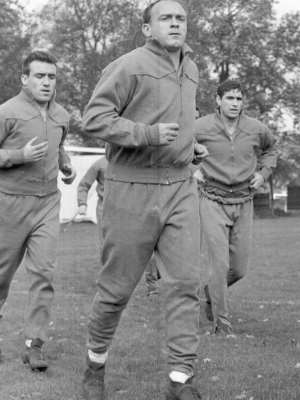 Real Madrid great Alfredo Di Stefano died in a hospital Monday, two days after a heart attack, the Spanish club said. He was 88.

He was taken to Gregorio Maranon hospital in the Spanish capital on Saturday and spent two days in a coma before he passed away.

Di Stefano turned 88 on Friday. The following day, he had a heart attack on a Madrid street near the club's Santiago Bernabeu Stadium. Paramedics were able to resuscitate Di Stefano after 18 minutes, but he spent the following two days in a coma.

The club's statement said “Real Madrid president, Florentino Perez, and its executive board want to express their deepest condolences and all their sympathy and affection for his children, family members and friends.”

Madrid appointed Di Stefano honorary president in 2000 and named its new training complex after him six years later, with a statue erected in his honor in 2008.

A diabetic, Di Stefano underwent a quadruple bypass with a pacemaker implanted in December 2005 after having a heart attack. He has been hospitalized several times in recent years to monitor his heart condition.