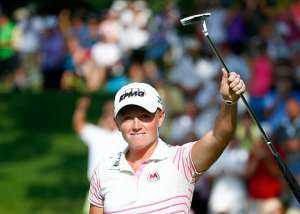 Lewis usurped Lydia Ko, Cristie Kerr and Angela Stanford by just one stroke, finishing on 12 under at the Pinnacle Country Club in Rogers.

New Zealand's Ko started the day in a tie for 14th but stormed up the leaderboard as she threatened to add to her three LPGA Tour titles.

But the 17-year-old fell narrowly short, as Lewis matched Ko's six-under 65 in the final round to claim her 11th tour victory.

Kerr and Stanford completed consistent weeks with rounds of 67, while South Korea's Ryu So Yeon was outright fifth on 10 under after a 69.

Wie, the overnight leader, struggled on Sunday as she carded a round of 73 to lose valuable ground in the Race to the CME Globe.