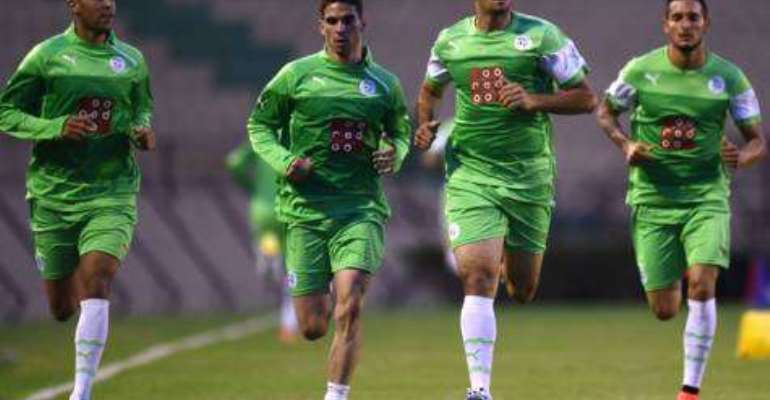 Since the day Madjid Bougherra scored the goal against Burkina Faso that qualified Algeria to the 2014 World Cup in Brazil, Algerians have been following their national team with great attention, fondness and admiration.

To the majority of them, this is the pride of the country, its success and its distinction among nations of the world. The Algerian squad is one of the best 32 football teams in the world and the best Arab team and the best African team, according to the latest Fifa rankings.

For politicians, this is the achievement they have been waiting for a long time, to keep the youngsters away from politics, social unrest and to forget about unemployment and housing problems.

Football, for many Algerians is the game that makes them proud of their country — a game that gives sense to their life and existence. When you listen to their conversations, everybody is a coach and is an expert in football tactics and techniques. They praise this player, criticise another and are not happy about the performance of a third.

As Vahid Halilhodzic, the coach, put it: 'In Algeria, you have 40 millions coaches. When I go to watch games to supervise potential players, the fans approach me to take a picture, then they give me the names of the players who should be in the team.'

These days the talk is all of the national team. People forget about the health of the president and his ability to rule the country. For the time being, the issue is who should and should not play for the national team; how the team should play to do better than the three previous participations in Spain 1982, Mexico 1986 and South Africa 2010, when they couldn't make it to the second round.

The team is the pride of the country since it is the only Arab team to qualify for the finals in both South Africa 2010 and Brazil 2014.

Four thousand Algerian fans are expected in Brazil to support their national team and several songs have been prepared exclusively for this World Cup. Rai star Khalid and other prominent singers have been cheering the team to help their morale in Brazil.

The Algerian national squad has united Algerians from all walks of life and different classes and political affinities. Unlike the last presidential election, where millions didn't dare to vote and expressed indifference towards the event, Algeria's first match on June 17 against Belgium is going to keep Algerians glued to their screens to watch, live, breath and follow the game. And why not a win to pave the way to the second round? The other games against South Korea and Russia are likely to draw even more attention.

After a 3-2 defeat in the qualifying play-off first leg in Burkina Faso, Algeria faced the very real prospect of missing out on the World Cup in Brazil. They almost missed it, but Algerian skipper Bougherra scored the historic goal that put the Fennec foxes in the limelight.

In 2010, after coming out on top in a fierce and controversial battle with Egypt to qualify, Algeria's performance in South Africa was poor. Coach Rabah Saadane wasn't successful in preparing a team with a scoring spirit and the strategy to challenge defences. Algeria didn't score a single goal.

Saadane himself was a defender when he played and had a tendency to build a strategy based on defending more than attacking. Unlike Saadane, the Franco-Bosniak coach Halilhodzic brought a new spirit to the Algerian squad. Himself a successful striker and top scorer in the French league with Paris Saint-Germain back in the 1980s, he put the Fennecs in the limelight by using young players such as Sofiane Feghouli of Valencia, Saphir Taider of Inter Milan, Nabeel Bin Taleb of Tottenham, Faouzi Ghoulam of Napoli, Yacine Brahimi of Grenada and Riyad Mahrez of Leicester.

These young players with outstanding talent, trained in European football academies, gave a new face to the Algerian team compared with that of 2010. Good midfielders and strikers add a touch that Algeria have missed since the glory days of 1982.

Many critics and specialists argue that this time Algeria will go to the second round and perform well thanks to the forward play of Al Arbi Hillel Soudani and Islam Slimani. However, the team suffers from some serious problems in defence, mainly in the centre.

The morale of the Algerian team is at its peak, though. They are ranked 22 in the world and have lost only once in their last 13 matches. They have won their three World Cup warm-up games against Slovenia, Armenia and Romania, scoring seven goals and conceding only two.

Will the Fennecs live up to the expectations of Algerians and not go back home after the first round? This depends mainly on the coach and how he is going to manage the first three games, as well as the determination of the players.