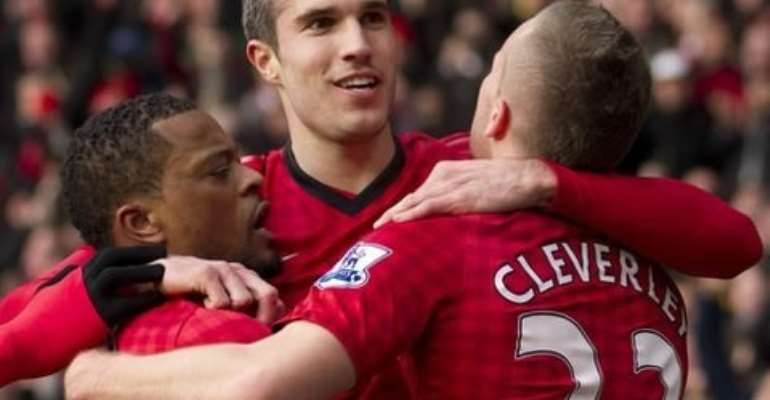 Robin van Persie scored against his former club Arsenal, again, to give Manchester United a 1-0 win at Old Trafford.

Since leaving the Emirates last year, van Persie has never failed to score against his ex-employers and he made that three games in succession as he bagged the winner for United.

He rose to meet a Wayne Rooney corner on 27-minutes to give David Moyes a much needed win and one which puts them right back in title contention, given that rivals Manchester City and Tottenham lost earlier in the day.

The three points takes United up to fifth in the table.

The opening 25-minutes had been played out in midfield, with neither side able or seemingly willing to get hold of the game.

A rare effort deflected effort from Wayne Rooney had showed his willingness and he played a big part in the break-through just before the half-hour.

Rooney made some space on the left and sent over a wicked cross that Thomas Vermaelen could only head over his own bar for a corner.

Rooney then took the resulting corner which saw van Persie leap above Olivier Giroud and glance the ball into the top corner to give United the lead.

Just before the break and United suffered a huge blow when captain Nemanja Vidic left dazed after a clash with his own keeper David De Gea and that meant he did not return after the break.

Tom Cleverley was the man brought on ahead of Marouane Fellaini to replace Vidic, which meant a tweaking of United's side with Phil Jones - who had impressed in central midfielder - dropping back to partner Jonny Evans.

Arsenal pushed hard at the start of the second-half, but on the hour again Rooney was at the heart of everything and he should have doubled the lead.

A Shinji Kagawa flick-on came to Rooney via van Persie, but with the goal at his mercy he sent his left-footed shot wide.

With that Jack Wilshere was introduced by Arsenal as they looked to push for the equaliser - but it was not to be as Rooney inspired United to a big three points.