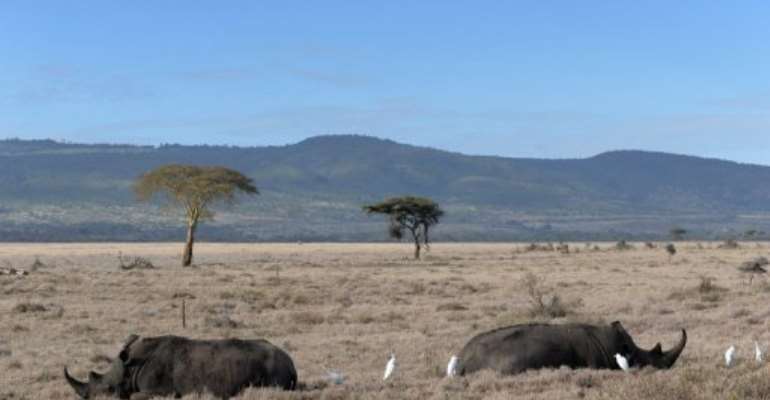 Two male rhinos lie in the savannah at the Lewa Wildlife Conservancy on December 10, 2010. By Roberto Schmidt (AFP/File)

NAIROBI (AFP) - The British widow of an ex-army officer hacked to death in an attack in their remote home in Kenya begged the police Tuesday to catch the "evil murderers."

David Parkinson, a former British army colonel and father of two, was killed by an armed gang early on Sunday at his cattle ranch near Nanyuki.

The attack has deeply shocked the tightly-knit community around Nanyuki, the main town in the mountainous Laikipia district some 200 kilometres (125 miles) north of Nairobi.

The region is famed for its high-end safaris and popular with British expatriates.

"David was a good man, a loving husband and great father, son and brother...(he) was brutally killed in the most senseless way," his widow Sonja Parkinson said in a statement released by the British High Commission.

She thanked Kenya's police for their "early efforts to find David's killers and hope that you will be able to track down and convict these evil murderers... they are a danger to Kenyan society."

Parkinson was a former director at the nearby Lewa Wildlife Conservancy, which grabbed world attention when Britain's Prince William proposed to his now-wife Catherine in October 2010.

His widow Sonja said that his conservation work had "resulted in direct improvements to the lives and skills of many" in the surrounding community.

"They too are telling us that his loss is also their loss, and that they too are sharing our pain," she said.

Armed robberies are common in Kenya, a country of gross inequality, although the majority of attacks target the poorest in society and rarely make media headlines.