Comprehensive Wrap: How Ghanaian Players Fared Abroad Over The Weekend 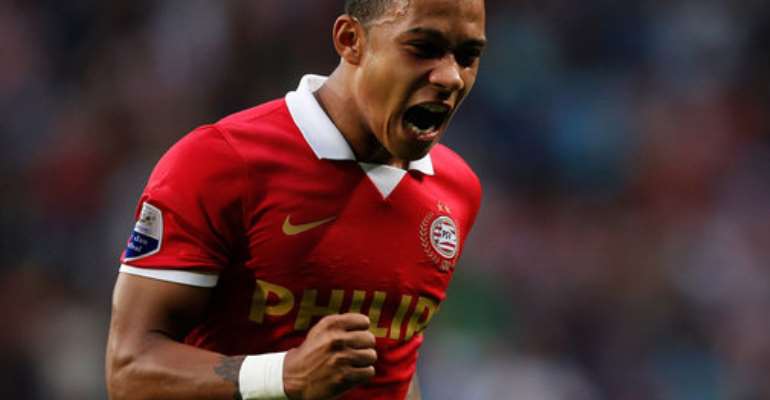 Ghanasoccernet.com has a comprehensive on how Ghanaian players fared abroad over the weekend.

ENGLAND
Derek Boateng marked his official debut in the English Premier League as he featured the entire 90 minutes for Martin Jol's Fulham who pipped Sunderland 1-0 on the opening day of the EPL.

Emmanuel Frimpong was an unused substitute by Arsenal who were humiliated by Aston Villa at the Emirates Stadium.

Midfielder Michael Essien watched from the bench as Chelsea posted a 2-0 win over Hull City on Sunday.

Elsewhere in the Npower Championship, Albert Adomah played an unused holding midfield role for Middlesbrough who drew 1-1 with Blackpool.

Whizkid Koby Arthur was introduced in the 83rd minute Birmingham City as the Blues suffered a 1-0 home defeat to Brighton&Hove Albion.

Attacker Jeffrey Schulpp lasted the entire duration of the game for Leicester City who won 1-0 over Derby County.

In the League One, Dutch-born Akwasi Asante played 74 minutes for Shrewsbury Town who beat Swindon Town 2-0.

ITALY
Ghana youth midfielder Alfred Duncan was unused substitute by Inter Milan who they posted a convincing 4-0 win over Cittadella in the Coppa Italia.

Maxwell Acosty was not in Chievo Verona team that won 2-0 over Empoli.

Midfielder Raman Chibsah was an unused substitute by Parma who cruised to a 4-0 win over Lecce to progress to the next stage of the Coppa Italia.

Afriyie Acquah did not make the Parma first team squad.

Emmanuel Gyasi was not picked by Torino who suffered elimination after losing 2-1 t0 Pescara.

Baba Abdul Raman did not play for Greuther Furth when they clinched a 2-1 win over Karlsruher SC.

German-born Ghanaian starlet Erich Berko grabbed his first goal of the season after scoring for Stuttgart II in their 2-0 win over Saarbrücken in the German third-tier league.

German-born Ghanaian winger Reagy Ofosu claimed his first goal of the season after scoring for FC Ingolstadt reserves in their 3-1 triumph over SV Seligenporten in the German Regionalliga on Friday.

Ghanaian youth architect Shadrach Eghan provided his third assist of the season for FC Twente Enschede as they crashed FC Utrecht 6-0 in the Dutch Eredivisie on Sunday.

Ghanaian forward Fred Benson scored twice for PEC Zwolle when they trounced NEC 5-1 in the Dutch Eredivisie on Saturday.

Winger Edwin Gyasi, striker Matthew Amoah and Kwame Quansah were all involved in action for Heracles Almelo when they cruised to a 4-2 win over Heerenveen.

Gyasi was introduced in the 71st minute but Amoah and Quansah started the game for Heracles.

Raymond Gyasi was not picked by AZ Alkmaar who won 2-1 at RKC Waalwijk.

Jeffrey Sarpong was a full-timer for NAC Breda who lost 2-1 at home to ADO Den Haag.

In the Dutch second-tier league, Dutch-born Ghanaian striker Erixon Danso scored his third goal in two games for nine-man Dordrecht who posted a narrow 2-1 victory over Almere City in the Netherlands second-tier league.

Defender John Boye could not recover in time to play for Stade Rennes as they lost 2-1 to OG Nice.

In the Ligue 2, Monaco loanee Dennis played the full 90 minutes for Caen who won 3-0 over Créteil.

BELGIUM
Daniel Opare continued his impressive for Standard Liege as he saw full time action for them in their 1-0 win over OH Leuven on Sunday.

Ghana youth winger Frank Acheampong scored on the second week running as he helped Anderlecht to record a convincing 3-0 win over newly-promoted side Waasland-Beveren in the Belgian Pro League on Sunday.

Abraham Kudemor was unused by Sporting Charleroi who were beaten 2-1 by Kortrijk at their own backyard.

DENMARK
København and AGF shared the spoils in a 1-1 and Ghanaian defender Dominic Oduro warmed the bench for AGF.

Kamal Issah was not in the Nordsjælland that drew 1-1 with AaB.

Kevin Mensah was a 46th minute substitute for Viborg who held SønderjyskE to a 1-1 draw.

King Osei Gyan played the full match for Viking in their 3-2 win over Brann.

Kennedy Ashia was not in the Brann team.
Former Hearts of Oak striker Mahatma Otoo was a 66th minute replacement for Ghanaian compatriot Gilbert Koomson in Sogndal's 1-0 away win over Sarpsborg 08.

SPAIN
Ghanaian youngster Mohammed Fatau made his Spanish top-flight debut on Sunday as his club Granada got their La Liga campaign off to the best possible start with a nervy 2-1 win at Osasuna.

CROATIA
Defender Lee Addy was not in the Dinamo Zagreb side that won 2-1 against Lokomotiva.

PORTUGAL
Ghana midfielder Haminu Dramani was sent off on his Portuguese Primeira Liga debut for Gil Vicente who beat 2-0 Académica on Sunday in their season opener.

Christian Atsu was left out of the FC Porto squad that won 3-1 at Vitória Setúbal.

David Addy played the full 90 minutes for Vitória Guimarães when they won 2-0 over Olhanense.

ROMANIA
Sadat Bukari came off the bench as a 73rd minute substitute for Astra who beat Pandurii Târgu Jiu 3-1.

There was no Seidu Yahaya in the Astra team.
Muniru Sulley played 19 minutes for CFR Cluj who were punished 3-0 by Steaua Bucure?ti.

Former Newcastle United boy Frank Danquah was axed from the Corona Brasov team when they drew 1-1 with Dinamo Bucure?ti.

SCOTLAND
Dutch-born Kevin Luckassen was not in the Ross County team when they were hammered 4-0.

SWEDEN
Ghanaian striker Godsway Donyoh was on target for Djurgarden in their 1-1 draw with BK Hacken on Sunday.

Nasiru Mohammed played till the 80th minute before he was replaced.

Yussif Chibsah and Daniel Amartey were also involved in the game for Djurgarden.

Benjamin Fadi lost his place in the Malmo FF team when they won 4-1 at Kalmar.

SWITZERLAND
Ghana attacker Samuel Afum opened his season goal account with a stunning brace for Young Boys as they whitewashed lower-tier side Veyrier-Sports 8-0 in the Swiss Cup on Saturday.

Ghana youth striker Ebenezer Assifuah marked his official debut for Swiss side FC Sion after coming off the substitute bench to play in their 3-1 victory over lower-tier side Sursee in the Swiss Cup on Saturday.

Ishmael Yartey set up the other two goals for Sion.

In the second-tier league, Kwame Karikari set up the only of the game for Bal?kesirspor when they won 1-0.

UKRAINE
Dominic Adiyiah played 32 minutes for Arsenal Kiev when they lost 1-0 to Chornomorets on Friday.