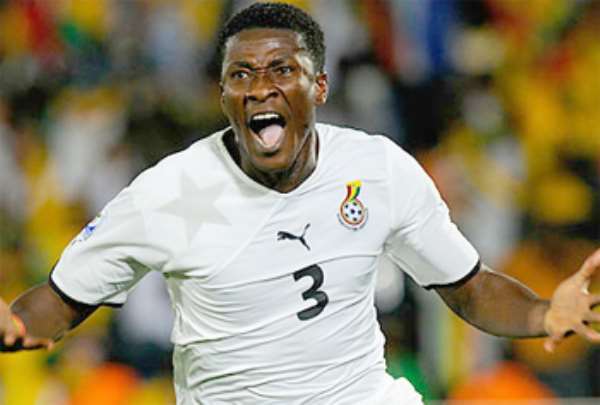 Ghana captain Asamoah Gyan yesterday came off the bench to cancel a 2-0 deficit for the Black Stars in their international friendly with Turkey at the Ataturk Olympic Stadium in Istanbul.

The Black Stars found themselves two goals down within the first 28 minutes of the game with the deadly striking duo of Burak Yilmaz and Umut Bulut causing all the havoc.

Yilmaz opened the scoring in the 7th minute as he capitalized on a defensive mishap to score with a composed finish.

His Galatasaray strike partner Bulut got in on the act by heading in from a well orchestrated move in the 28th minute.

Dominic Adiyiah, who led the attack for Ghana in the first half, together with Christian Atsu and Mubarak Wakaso probed in vain to find the back of the net.

The first half score-line compelled Coach Kwasi Appiah to reshuffle his cards by introducing Asamoah Gyan and Juventus star Kwadwo Asamoah which paid off.

Gyan pulled one back a few minutes after his introduction and cancelled the lead in the latter part of the game.

The Stars will host Zambia for their crucial World Cup qualifier in Kumasi on September 6, and later travel to Japan for another international friendly on September 10.

Chiefs and Queen mothers of Nadowli-Kaleo congratulate Alban...
7 minutes ago

I intend to live my my oath – Bagbin
7 minutes ago