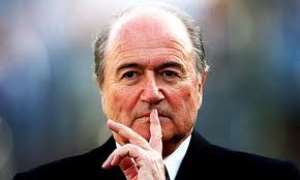 Ghanaian midfielder  Kevin-Prince Boateng who tore his shirt and walked off the field at the opposite end after suffering a couple of racism earlier this year  whiles playing against fourth division Pro Patria made the headlines in January.

Later on Kevin demanded that ' FIFA must do more.'

The FIFA President praised Boateng for making a 'strong and courageous stand.'