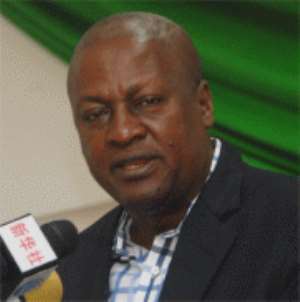 Vice President John Dramani Mahama has tasked the Ghana Football Association (GFA) to provide a comprehensive report on the just-ended African Cup of Nations held in Gabon and Equatorial Guinea.

He has meanwhile, appealed to radio sports callers and soccer commentators to use decorous language that would encourage players of the Black Stars to put up their best in subsequent competitions.

Vice President Mahama made the call when he met members of the Association Tueday to find out what led to the failure of the national team, the Black Stars from annexing the ultimate trophy of the tournament.

The meeting, which was at the behest of Vice President Mahama, was also to ensure that the animosity that crept into the country after the elimination of the national senior team at the Semi-final stage was shelved for the better.

Vice President Mahama said expectations of Ghanaians were so high, particularly when government had provided all the resources and logistics to facilitate the performance of the team and it was therefore fair to explain to the tax payers on what went wrong.

He appealed to the GFA and other stakeholders to talk to Asamoah Gyan to rescind his decision to temporarily retire from the national team, adding “It is refreshing to hear that Asamoah Gyan has announced his return to the team soon, but it is important to get him back into the team as soon as possible.”

The Vice President added: “The voices of the commentators and callers do not represent the entire Ghanaian population and we therefore need to continue to encourage the players to put up their best in subsequent tournaments.”

He commended the Chipolopolo, the national team of Zambia for winning the AFCON Cup, adding “We are hoping that at the next round the Cup will find its way to Ghana.”

Kwesi Nyantakyi, President of the GFA said they would do everything within their purview to produce a comprehensive report that would calm down nerves.

“We owe Ghanaians an explanation, and hopefully the report will be ready after which, we shall forward it to the Ministry of Youth and Sports for onward transmission.” He added.