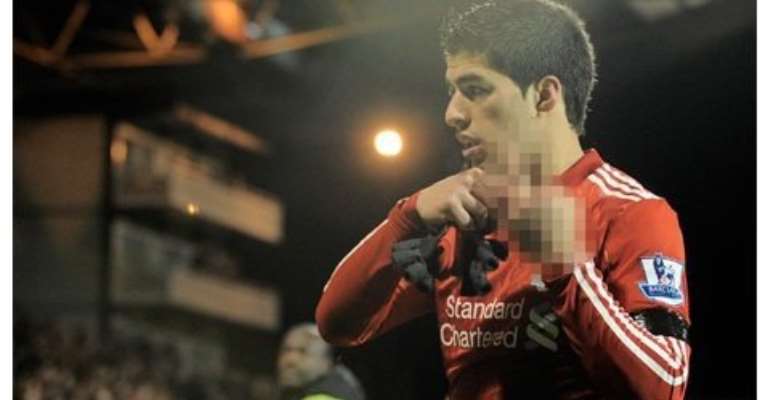 The Football Association is reviewing a hand gesture made by Liverpool striker Luis Suarez after their 1-0 defeat at Fulham on Monday.

Suarez, who had been called a cheat by the home fans over a penalty appeal, raised the middle finger of his left hand as he left the pitch.

Reds boss Kenny Dalglish said: "I have not seen the picture. If [it] is true then I've a decision to make."

That stems from an incident during Liverpool's 1-1 draw with Manchester United in October that led to French defender Patrice Evra alleging that Suarez had racially abused him.

The FA is yet to receive the referee's report from the game, or any complaints about the incident involving Suarez.

Meanwhile, Dalglish said it was "scandalous" that Fulham fans chanted "cheat" at Suarez during his side's defeat at Craven Cottage.

Dalglish defended the striker after Fulham fans voiced displeasure in the belief Suarez had gone down too easily.

Of the taunts aimed at Suarez, Dalglish said: "I would like to see you write that in the paper because you would be in a bit of trouble as well.

"It is about time he got a wee bit of protection."
Suarez suffered a barrage of chants after one particular incident in which he went down following a challenge by Brede Hangeland.

Midfielder Spearing was sent off after fouling striker Moussa Dembele with his follow-through in a tackle, having initially won the ball.

Dalglish said: "Jay will be upset, but we will have a little look and see whether it is worthwhile appealing.

"I think you need to ask the referees what the interpretation is."

Spearing was shown a straight red card by referee Kevin Friend after 71 minutes, with the score at 0-0, before Clint Dempsey's late winner sealed victory for Fulham to move them 13th in the league.

Dalglish added: "It is frustrating because nobody tells us what the level of acceptance is. Jay had no other thought on his mind other than to win the ball and he did win it.

A series of decisions went against Liverpool, with Charlie Adam denied a penalty after being brought down by Philippe Senderos and Luis Suarez having a strike disallowed for offside.

Discussing the game, Dalglish said: "It could have gone either way but I don't think we were going to get anything tonight, were we?

"The goal Luis Suarez scored that was ruled offside could have gone either way. Charlie Adam could have got a penalty when he was pulled down on the edge of the box.

"Tonight wasn't as well as we've been playing, but it was enough to have won the game. We never got the luck but we have just got to brush ourselves off and get on with it."