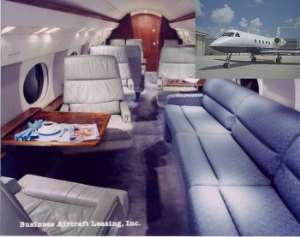 The management of Kumasi Asante Kotoko has refuted allegations made by Mr Edward Osei Kwaku, Minister of Youth and Sports on Adom FM on Monday, November Four, to the effect that the club refused to use the Presidential Jet for their trip to Congo for their African Cup Winners Cup second leg match. Mr Kwame Amoah Bosompem, Accra Representative of the club, said in Accra on Tuesday that Kotoko wrote to the Minister on October 26, asking him to request the presidency to release the Jet for their trip to Congo, but no response was received. "With no response in sight from the Minster, Kotoko took pains to contact its sources at the Office of the Chief of Staff and the Ghana Air Force and we were informed that even though the Presidency was ready to release the aircraft, there was a problem with the radar of the plane and thus it was risky to travel with it to Congo". Based on this, he said the club made its own arrangement with Ethiopian Airlines and travelled the long journey through Addis Ababa to Brazaville. On the club's present request for the jet, he said the Minister's assertion that the Chief of Staff informed Kotoko that it would not be possible to release the Folker 28 Presidential jet but rather the Folker 27, is a surprises to the club. "This is news to us. As far as we are concerned Kotoko, wrote to the Minister of Youth and Sports and we expect him to officially respond to us. We have not been in communication with the Chief of Staff even though we copied him of the letter as a matter of courtesy. To therefore feed the media with information which has not been made available to Kotoko is very unfortunate", Mr Bosompem said. He said though the club has not received any response from the Minster on their request, the club can't use the Fokker 27 aircraft because their safety cannot be guaranteed since authentic information from the Ghana Airforce indicated that the two Fokker planes are all well overdue for maintenance. :"We put in a specific request for the Fokker 28 aircraft and we await the Ministry's response. Until then we cannot make an informed statement on the Minister's scattered responses in the media", he stressed.