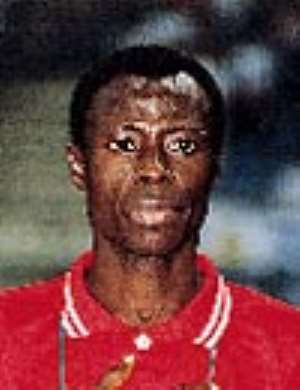 The Head Coach of Obuasi Goldfields, Mr. Oti Akenteng has commended Kumasi Asante Kotoko’s arrowhead, Nana Arhin Duah for the selfless role he played in Kotoko’s 4-0 drubbing of A.S Police of Congo, in their semi-final first leg encounter at the Kumasi Sports Stadium on Sunday. Speaking to ghanaweb at the Kumasi Sports Stadium after the match, Coach Oti, one of the most respected Coaches in Ghana emphasised that it is not his policy to single out individual players for praise, however, considering the fact that the striker is just recovering from an injury, and for him to have contributed so immensely in this match deserves commendation he, said. According to the Coach, apart from crowning a good show with a clinical finish, Arhin Duah, also had a hand in all the remaining goals. He really worked hard and played the type of game I’ve always known him to play, and with this show, I’m inclined to believe that he’s back to form .Of course, we shouldn’t forget he went to a football school, and as a football graduate, sometimes we should not be overawed when he exhibits all what have been taught him, he said. On the chances of the Porcupine Warriors, the former Deputy National Coach urged the Kotoko defence to emulate Joe Hendricks, as he epitomizes a serious warrior hungry for success on a battlefront. Coach Oti stated that with good preparation, coupled discipline on the field of play, Kotoko are capable of beating the Congolese at their own backyard.