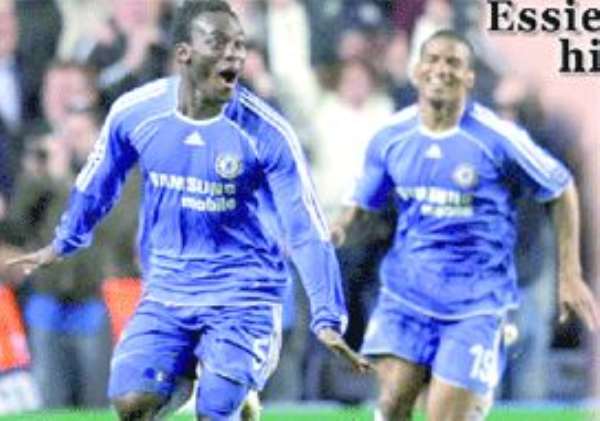 Ghana's Michael Essien made history with Chelsea when they beat English rivals Liverpool 3-2 at the famous Stamford Bridge wednesday to reach the final of the UEFA Champions League for the first time in the 52-year history of the competition.

Essien's masterful display on the right side of defence helped Chelsea nail Liverpool 4-3 on aggregate and bundle the Reds out of the Champions League for the first time in their three meetings in four seasons at the semi-finals stage.


The feat has offered Essien a unique opportunity to enter the records as the fourth Ghanaian to play in the UEFA Champions League final, after the legendary Abedi Pele, Marcel Desailly and Samuel Osei Kuffour achieved the feat with Olympic Marseille, AC Millan and Bayern Munich, respectively.


Essien now heads for the Moscow final on May 21, the first all-English final, with great prospects of celebrating a unique double of domestic and European success if Chelsea, tied on 81 points with Manchester United in the league, are able to edge their English rivals on both fronts.