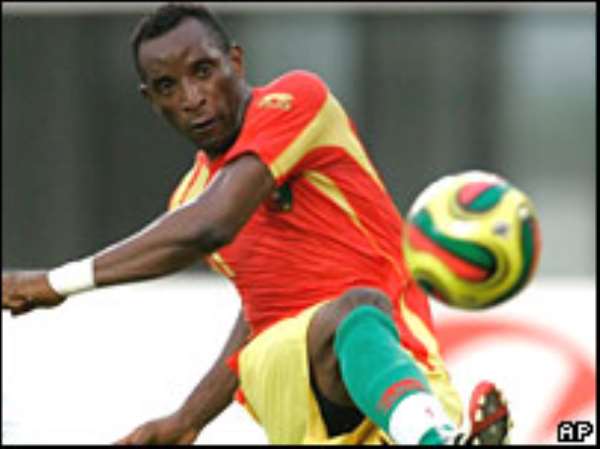 Guinea reached the quarter-finals of the Africa Cup of Nations for the third time in a row after a tight Group A draw with Namibia in Sekondi.

Souleymane Youla scored Guinea's opener on 62 minutes when he slotted home a through ball from Mamadou Dioulde Bah.

Brian Brendell earned Namibia their first point of the tournament when he cut in from the right to finish inside the left-hand post.

Guinea's point means they finished second in the group with four points.

Guinea came into the game knowing that a win or a draw could enable their qualification from a congested group.

Although both Ghana and Morocco were ahead of them, Guinea's 3-2 victory over Morocco meant that they would surpass the North Africans should they lose to the hosts in Accra.

The Syli Nationale started with intent when Ismael Bangoura missed a chance in the first minute volleying wide from a left-wing Fode Mansare cross.

Then after five minutes, Namibia goalkeeper Athiel Mbaha produced an excellent save to tip a stinging Daouda Jabi free-kick around the post.

But despite relentless pressure from Syli Nationale, the best chance of the opening stages fell on the break to Namibia's Muna Katupose.

After great work on the right from Brendell, Katupose headed over from six yards with the goal at his mercy.

And only a Bobo Balde intervention stopped another fine Brendell cross when Katupose was ready to pounce.

Mbaha, however, was the busier of the two keepers as continued openings down the right flank led to a pull back to Bah whose shot was well saved.

Collin Benjamin hit the side netting after another Namibia counter-attack, but with the game becoming more stretched, Youla should have given Guinea the lead on 40 minutes.

A through ball by Mansare gave him a golden chance to settle his team's nerves but he curled his shot wide of the post when he should really have hit the target.

For such a crucial tie, the stadium in Sekondi was near to empty but the flamboyantly-dressed crowd were in good voice with the trumpets keeping in time to the tempo of the game.

Namibia were restricted to a long shot just after the break before Guinea's Bangoura decided to blaze another opportunity high and wide when more composure could have led to a goal-scoring chance.

But without influential captain Pascal Feindundo, who was suspended after being sent off during the 3-2 victory over Morocco, the Syli Nationale were looking uninspired and unable to make a decisive breakthrough.

But just after the hour mark, Youla made up for his earlier miss to slot home a cool finish.

Bah was the architect as he collected the ball close to the half way line and threaded a delicious through ball to Youla who tucked it into the far corner.

The goal awoke the Guinea supporters who were becoming almost one-tone in their match soundtrack and it also sparked the Guinea team into life as they began to sense their path to the last eight.

Fode Mansare was still an outlet for Guinea down the left flank but his final delivery continued to let him down.

Despite not looking likely to score, Guinea were becoming more and more comfortable at the back and the experience of Celtic's Dianbobo Balde paid dividends as the defence were happy to take the sting out of the game.

But as things looked like they might stay as they were, Brendell took his tally to two for the tournament when he took hold of a mis-placed pass to score a finely taken individual goal.

The midfielder picked up the ball on the right hand side of the pitch and took on the Guinea defence before striking the ball past Kemeko Camara's left hand.