Will Hasmal too upset Kotoko? 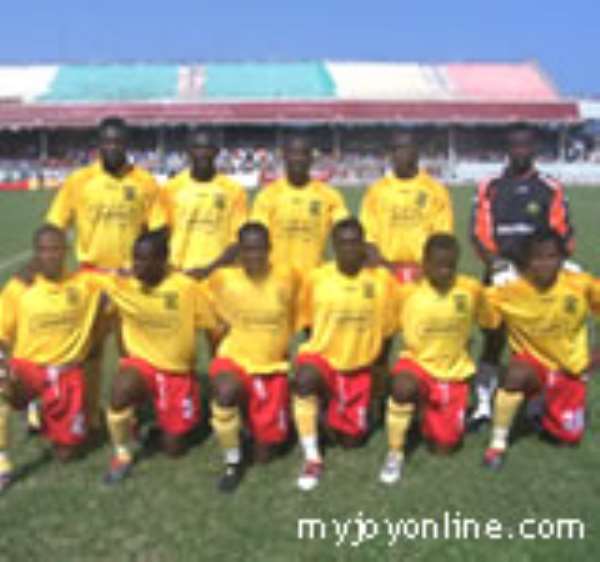 
The fact that Kumasi Asante Kotoko's clean record was broken by Ashantigold last weekend signals a competitive twist as the Onetouch Premiership plunges into week seven.

Though their 'invincible wings' have been clipped, Kotoko will be the centre of attraction as they play Hasaacas at the Baba Yara Stadium. And as usual, Kotoko fans will rest their hopes on their tormentor-in-chief, Eric Bekoe, whose form seems to have hit an all time best, to deliver. It is obvious that Kotoko would stop at nothing to bury Hasaacas and sustain their momentum which slowed down last weekend against rivals Ashantigold.

Hasaacas have a harder fight in this encounter considering their last but one position on the league table. The 1-1 draw with Tema Youth, and convincing 1-0 victory over Heart of Lions, are their best performances so far, and to be able to breathe more life into their campaign, they must attempt a possible upset of Kotoko, no matter how Herculean it may appear. It is not for nothing that they are called Giants of the West.

Defending league champions, Accra Hearts of Oak continue what has so far been a bumpy ride, this time at the Ohene Djan Stadium against Tema Youth who lie second from the bottom of the league table.

In the technical saddle of Tema Youth will be former Kessben Assistant Coach, Isaac 'Opeele' Boateng, who is expected to provide the needed fuel of motivation for his players to make victims of Hearts. This should not be far-fetched, considering what trouble Ashantigold, King Faisal and Kessben gave the defending champions. But in as much as the Phobians could be suffering turbulent times, they could just rise to the occassion and deepen the woes of Tema Youth.

At the Kpando Stadium will be another thriller involving Heart of Lions and Kessben. Lions, who lie second on the table, have so far proven invincibile at home and this is what the Premiership new comers have to deal with. At least they will not be lacking confidence since their victory over Hearts at their Abrankese home has given them a boost.

Dansoman-based Liberty Professionals face a major test of strength and character as they play away to Berekum Arsenals at the Golden City Park. Just like Heart of Lions, Arsenals are yet to fall at home, so Liberty would attempt repeating their away conquest of Kessben at Abrankese during week three.

Coach Abdul Razak's RTU welcome King Faisal to their Kaladan Park in Tamale in what could be a tough encounter. RTU have had a good start to the season and Faisal who, after some flaws found their rythm and lifted themselves from the bottom of the league table, will attempt to maintain their tempo.

And this afternoon Real Sportive will play Gamba All Blacks at the ElWak Stadium.