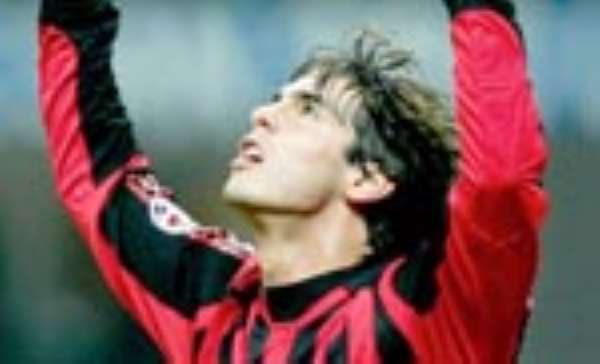 Kaka capped a virtuoso performance by scoring his side's third goal and setting up two for Filippo Inzaghi as the Italians became the first European side to win the revamped tournament.


“This was the one trophy I hadn't won,” Kaka told reporters. “It's magical to finally get my hands on it. I can't describe how happy I am. I've won everything now - it's amazing.”

A slide-rule pass from the Ballon d'Or winner gave Inzaghi the simple task of firing Milan into the lead in the 21st minute.

Kaka got on the score sheet in the 61st minute, beating goalkeeper Mauricio Caranta after a dazzling solo run before squaring the ball to Inzaghi who slid home Milan's fourth.

Milan finished a pulsating final in front of 68,000 fans in Yokohama with 10 men after Georgian defender, Kakha Kaladze was sent off in the 77th minute.

The Argentine side was also reduced to 10 men before the final whistle after substitute Pablo Ledesma was shown red for a wild lunge at Kaka.

Boca had some consolation with a late own goal by Massimo Ambrosini but it was too late to prevent the Italians snapping Europe's jinx at the Club World Cup.

The Milanese also avenged their 2003 loss to Boca in the tournament's forerunner, a one-off game between the champions of Europe and South America.

“I'm very proud of my team,” said Milan coach, Carlo Ancelotti whose future at the club still appears uncertain with Jose Mourinho being linked with his job.

The home side's goalkeeper Ryota Tsuzuki was the hero, stopping the African champions' first and fourth spot-kicks, after the game had finished 2-2.