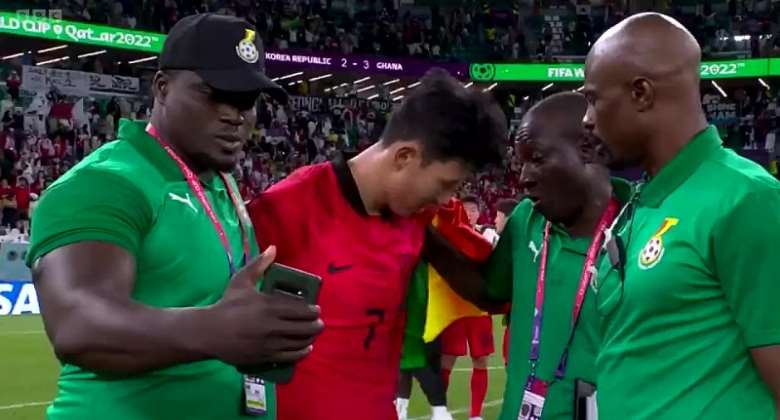 Son Heung-min was left in tears after South Korea’s World Cup hopes were rocked by defeat to Ghana – but that didn’t stop one of the opposition coaches from trying to get a selfie with him.

South Korea look set to exit Qatar at the group stage after their 3-2 loss.

They fought back from 2-0 down to draw level, but Mohammed Kudus’ 68th-minute goal gave Ghana victory.

The result means South Korea will have to beat Portugal in their final Group H match to have a chance of qualifying.

Tottenham’s Son – who is playing at the tournament with a protective mask after fracturing his eye socket – went through a range of emotions after the full-time whistle.

Son, along with some ofteammatesmates, reacted angrily after referee Antony Taylor blew his whistle for full-time and didn’t allow South Korea to take a corner.

Coach Paulo Bento was shown a red card for his protests and then had his hand swatted away when he tried to put an arm around a clearly frustrated Son afterwards.

Perhaps as the realisation of the result sunk in, Son broke down in tears.

He was crouched on the floor and was consoled by some Ghana players and coaches, including assistant George Boateng.

As Boateng spoke to Son, another member of the Ghana coaching team saw the opportunity for a selfie, putting his arm around the Tottenham star and taking a snap.

Boateng did not look impressed and ushered him away as Son walked off.

While South Korea’s hopes of qualifying look slim, Ghana are in with a chance after their first win.

Ajax’s Kudus was the hero with two goals and he told the BBC: “It’s a good feeling. We wanted the three points and we got them. Everyone was absolutely on top of their game today. They came back to 2-2, we had to come up with more energy and it happened.

“I want to thank all my team-mates, it’s a team game and they all played a part in my performance. The cross in from Jordan [Ayew] and the cut-back from Inaki [Williams]. Big up to everyone because everyone played a part.”