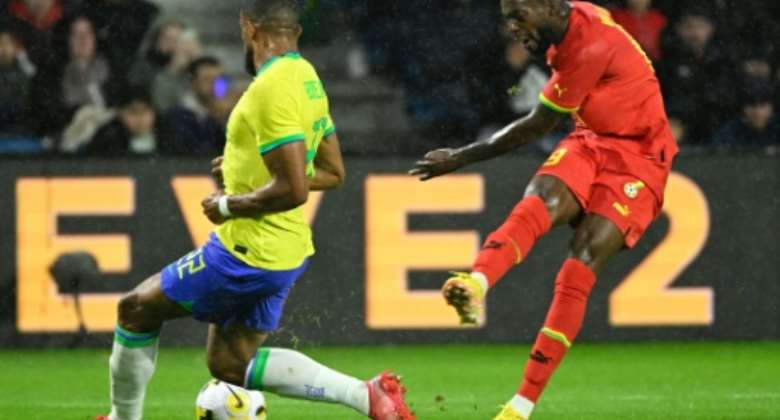 Spanish-born forward Inaki Williams (R) made his Ghana debut in the second half of a 3-0 loss against Brazil. By Damien MEYER (AFP)

Ghana coach Otto Addo acknowledged the "danger" of integrating a number of new players into the squad ahead of the World Cup, but he does not believe it will have a destabilising effect.

The 28-year-old Williams won one cap for Spain in 2016 and Lamptey, 21, played regularly for England's youth teams before opting to switch allegiance.

German-born Addo, who played for Ghana at the 2006 World Cup, has also called up Ransford-Yeboah Konigsdorffer and Stephan Ambrosius, both capped by Germany at under-21 level.

"It's always a danger to get new players, especially if the players who are there before achieve something really, really good," said Addo, who oversaw the World Cup play-off win over Nigeria in March.

"There's a group dynamic which I don't want to break, but I think from what I saw they were welcomed well.

"They did well in training and get along with each other and it's not like they were strangers. Before some knew each other from playing in the same league and everything is okay."

Addo believes adding European-born members of the diaspora will increase competition for places and benefit the Black Stars.

"It's a good situation. We have pressure from the bench because new people are there who are very, very solid in Europe, and we have players on the pitch who have to prove themselves," he said.

Addo admitted to being "very unhappy" with the nature of his team's defending at set-pieces, but insisted the loss to Brazil would provide a useful learning opportunity before heading to Qatar.

Ghana coach Otto Addo (R) has a contract that runs until the end of this year's World Cup. By Damien MEYER (AFP)

Brazil, the world's top-ranked side, tore Ghana apart in a dominant first half in Le Havre, with Richarlison striking twice after Marquinhos headed in the opener.

The second of Richarlison's goals came from a Neymar free-kick, with the Tottenham Hotspur forward nodding in at the near post.

"In all, the team was bad, if you lose 3-0 you're bad," Addo said after Ghana suffered their fifth defeat in as many meetings with Brazil.

"I was very disappointed, especially with the set-pieces. They had a lot of chances. We were a bit lucky in some situations they didn't score."

But he bristled at the suggestion the four-time African champions were not ready to compete at the World Cup.

"If you see how many times they (Brazil) have scored three or four goals, then nobody's ready," said Addo.

"It's not like we were playing against some small boys. They're really, really good."

At the 2018 World Cup in Russia, no African team made it to the knockout phase for the first time in 36 years.

Ghana, who were a missed Asamoah Gyan penalty away from reaching the last four in 2010, have one final tune-up game against Nicaragua on Tuesday before Addo must finalise his World Cup plans.

"We lost 3-0 so everybody probably thinks this is a weak team. This is maybe an advantage for us," he said.

"Everything brings something good if you learn from it. I hope that I learnt myself. Maybe I have to do some things differently. If everybody thinks like that then we'll do better. I'm not concerned at all."

"I made some mistakes, I will learn from them and can hopefully improve," he added.

"The second half showed we can compete with them."

Ghana play Portugal in their opening match at the World Cup on November 24. They have also been drawn alongside Uruguay and South Korea in Group H.