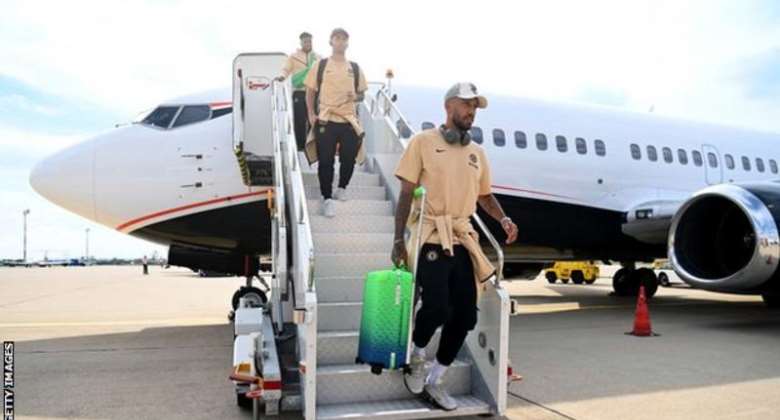 Pierre-Emerick Aubameyang leaves the aircraft after travelling with his Chelsea team-mates to Zagreb, Croatia

Pierre-Emerick Aubameyang could make his debut from the start in Chelsea's opening Champions League Group E game against Dinamo Zagreb on Tuesday.

Blues boss Thomas Tuchel says his new signing is "invited to prove a point" after moving from Barcelona in a £10.3m deal on transfer deadline day.

Aubameyang will need to play in a mask after suffering a jaw injury during a violent robbery at his home last week.

He only played eight minutes for Barca this season.

Tuchel says the Gabonese striker, 33, has to be "managed" and "needs minutes to get his full fitness and rhythm".

The German added: "He cannot play 90 minutes so it's on us to find a solution if he comes from the bench or he starts."

Former Arsenal striker Aubameyang has previously celebrated some goals by putting on a film character's mask.

Asked at Monday's news conference if Aubameyang was fit to play the "superhero" with his protective mask, Tuchel said: "Don't put any further ideas into his head please.

"When he scores he can celebrate but first of all he needs to score. He is very ambitious and very focussed. He is hungry to play for us and prove a point.

"That is why he is here and that's what we have felt from the first moment."

"We decided with Thiago he will have a break from the travelling and the stress after playing every minute in very intense matches so far," he said.

"It was the moment to give him a break instead of putting him on the bench and have the travel issues so he can take care of his recovery.

"Then we had the opportunity to take everybody who is in training and is available, and that includes Denis."