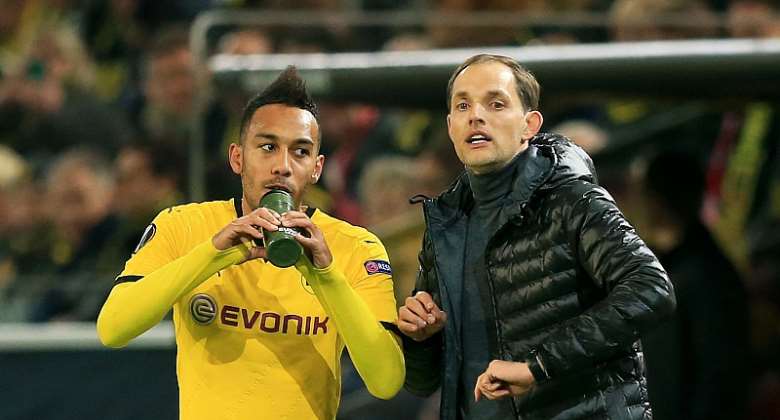 Chelsea boss Thomas Tuchel says he will always have a "close bond" with Pierre-Emerick Aubameyang after working with the forward at Borussia Dortmund.

The Blues are reportedly keen to sign Aubameyang from Barcelona before the transfer deadline on 1 September.

Aubameyang moved to Barca in February after a disciplinary breach at Arsenal and Tuchel said he was still close to the player after their time in Germany.

"I experienced no issues with him," said Tuchel on Friday.

Tuchel refused to discuss the prospect of signing Aubameyang this summer but was happy to discuss his experience of working with the player at Dortmund, where the Gabon forward spent five years before joining Arsenal in 2018.

"This is totally separate from anything that is happening now, but I enjoyed a lot working with Auba while I was at Dortmund," added Tuchel, before his side's home game with Tottenham on Sunday [16:30 BST].

"Some players stay your players because you were very, very close and Auba is one of those players.

"There was always straight away this close bond. They always stay your players in a way."

Arsenal signed Aubameyang for £56m in January 2018 but his departure on a free transfer came after he was stripped of the captaincy following a disciplinary issue.

"In Dortmund there was never an issue," added Tuchel.

Arsenal boss Mikel Arteta said he hoped Aubameyang would receive a warm welcome if he returned to London.

"What's been done has been to defend the club and put it in the best possible position," said Arteta before Arsenal's home game with Leicester on Saturday [15:00].

"Auba is an exceptional player. He did so much for us. I hope that he gets a good reception [if he returns] because he deserves that."

E-Levy: Gov’t determined to behave like a vampire to suck th...
56 minutes ago

Gov’t will hide behind IMF discussions to force more hardshi...
56 minutes ago