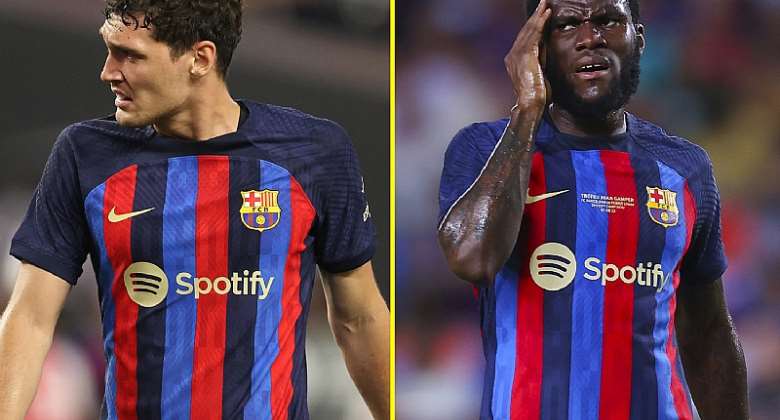 New signings Andreas Christensen and Franck Kessie could depart Barcelona if they are not registered before the club's La Liga opener, according to reports.

Financial difficulties continue to cause problems for the Catalan club, who have thus far been unable to register their new additions and summer renewals with the league.

Christensen and Kessie joined the club on free transfers after the expiry of their contracts with Chelsea and AC Milan respectively at the start of July.

With registration yet to take place, however, the pair could choose to sign with another club, according to a report from ESPN.

Robert Lewandowski, Raphinha and Jules Kounde have all also been brought in by Xavi's side this summer, and are also yet to be registered, though do not have the option of pursuing a new club after leaving Bayern Munich, Leeds and Sevilla.

The contract renewals signed by Sergi Roberto and Ousmane Dembele have also been registered.

Barca have attempted to create sufficient financial resource to register their new players, selling a quarter of their domestic television rights for the next 25 years and a significant stake in Barca Studios.

But ESPN suggest that, despite the optimism of club president Joan Laporta that he will be able to register the additions in time, there has still not been enough incoming cash for Barcelona to be able to sign on the quintet.

The report suggests Pique and Busquets could again be asked to negotiate wage adjustments.

The club continue to be linked with a move with Manchester City's Bernardo Silva, who is believed to covet a move to the Spanish club, while Laporta has indicated that he is hoping to keep hold of Frenkie de Jong, both often linked with a switch to the Premier League and either Manchester United or Chelsea.

"He is a Barca player of great quality and we want him to stay," said Laporta of the Dutch midfielder, who is currently in dispute with Barcelona over unpaid deferred wages.

"He has offers but we want him to stay and he wants to stay too."