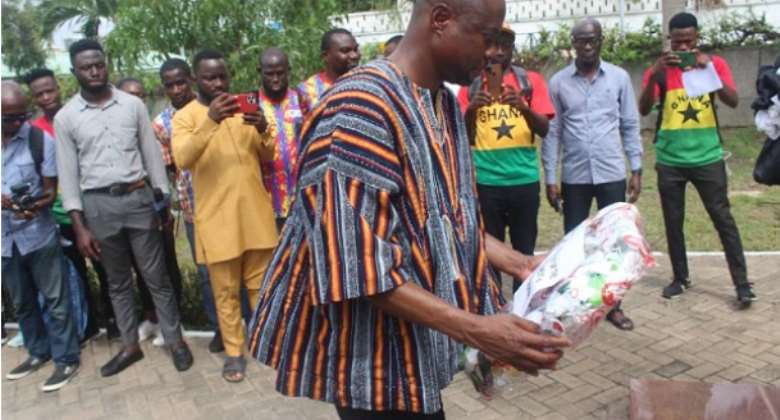 The Deputy Minister of Youth and Sports, Evans Opoku Bobie, has urged football fans to report hooligans to the appropriate authorities for punishment.

Mr Bobie, who laid a wreath on behalf of government to mark the 21st anniversary of the May 9 Stadium Disaster at the Accra Stadium yesterday, said hooliganism must not be condoned at any level of the sport.

"Fighting hooliganism in the country is a collective one and I entreat everyone to take part in stopping that from our match venues.

“If we can fish out these culprits and deal with them, we can sanitise the sport and avoid hooliganism at our match centres,” he stressed.

For his part, the Director General of the National Sports Authority (NSA), Prof. Peter Twumasi, said his outfit had put in measures to curb hooligan behaviours at the stadium during match days.

"We have put in measures to avoid another disaster from taking place but it starts from the spectators and how they accept outcomes of matches," said Prof. Twumasi.

He, therefore, called on spectators to accept the outcome of matches to avoid attacking officials during games, which, he said, could lead to another disaster.

Dr Kwaku Ofosu Asare, a survivor of the May 9 Disaster and the Executive Chairman of the Local Organising Committee (LOC) for the 2023 African Games, shared a harrowing experience of how he witnessed people losing their lives, having worked as a commentator for the state-owned Ghana Broadcasting Corporation (GBC) during the match.

The veteran sports journalist said, "21 years ago I ran commentary when Hearts of Oak played Asante Kotoko and I saw everything; the action, the police, and what have you."

“Two supporters were brought to me to put in my car but I couldn’t move my car and they had to be taken out on the shoulders of colleagues. I’m sure their names were among those whose names were mentioned. I saw people dying on that day," he recalled.

About 127 football fans died after disappointed Asante Kotoko supporters ran riot and ripped off plastic seats after their club lost 1-2 to arch rivals Hearts in a titanic Premier League match at the Accra Stadium on that fateful night.

The crowd violence provoked a spontaneous response from the police who fired tear gas into the crowd, leading to the melee that resulted in the nation’s worst ever stadium disaster.