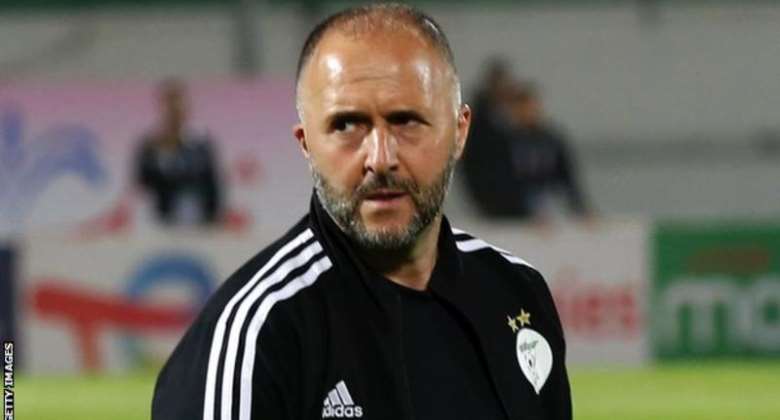 It has been one month since Algeria crashed out of the 2022 World Cup qualifiers, but the emotional fallout from the elimination continues to reverberate across the North African nation.

The Fennecs were seconds away from qualifying for their fifth World Cup before Cameroon forward Karl Toko Ekambi extinguished all hopes with a dramatic last-minute goal at the Stade Mustapha Tchaker stadium in Blida, Algeria.

A few days after the match, Charafeddine Amara, the incumbent president of the Algerian federation (FAF), tendered his resignation and accepted responsibility for Algeria's absence from the tournament in Qatar.

His departure will become official at the end of May and a new president will be appointed at FAF's general assembly.

In addition to Amara's resignation, however, questions were raised surrounding the future of Algeria's head coach Djamel Belmadi.

Prior to the first leg in Cameroon, he announced that, if Algeria failed to qualify for the World Cup, he would "take responsibility" and table his own resignation.

After the second leg in Algeria, however, Belmadi preferred to ask for some reflection time before making a final decision.

Since his arrival in 2018, the 46 year-old has been broadly recognised as one of Africa's best young managers.

He helped Algeria win the 2019 Africa Cup of Nations and subsequently led them on a 35-match unbeaten run, which set a continental record.

But the past six months have been trying for the Parisian-born tactician; Algeria crashed out of the group stages of the 2021 Nations Cup and followed that up with missing out on the World Cup.

After a month of reflection, Belmadi finally sat down for a 50-minute interview in which he touched upon his reasons for continuing with the Algerian national team.

"I proposed rescinding my contract to my superiors and I gave them the opportunity to end the contract. It was rejected," he said.

"The second reason (for staying), is the supporters, and our people as a whole, who supported and believed in us, my staff, myself, and our players, despite this crisis."

After explaining his motives for staying on as coach of Algeria, Belmadi's interview turned increasingly controversial.

The main target of Belmadi's ire was Gambian referee Bakary Gassama, a noted match official in his fifteenth year of service who oversaw their elimination in Blida.

The Algerians contested a push in the penalty area in the build-up to Cameroon's opening goal scored by Eric Maxim Choupo-Moting, and the North Africans were also denied a goal in extra time as Islam Slimani's header was adjudged to have ricocheted off of his elbow after a video assistant referee review.

"Never again will we allow a few people to conspire against our country," Belmadi ranted in a video posted by FAF.

"I didn't like at all to see the following day when this referee (Gassama) left from Algiers airport, to see him comfortably seated in the lounge suite with a coffee and a pastry. I didn't like that.

"He stole the hope of a whole nation.
"I'm not saying you have to kill him, I'm not saying things like that. He's more than a bully. We can't ever accept that again."

Belmadi's words were met with shock and anger, with the Gambian federation calling on world governing body Fifa and the Confederation of African Football to open disciplinary proceedings against the former Marseille and Southampton midfielder.

The Cameroonian federation (Fecafoot) was also displeased with his comments and its president, the former Barcelona striker Samuel Eto'o, released a statement calling for him to be sanctioned.

"Cameroon reserves the right to bring this matter before the FIFA Ethics Committee in the coming days," Eto'o wrote.

The threat of suspension, therefore, looms large ahead of Algeria's 2023 Nations Cup qualification campaign next month.

When the clouds clear and the focus returns to matters on the pitch, supporters can look forward to a new-look squad and a state-of-the-art stadium.

After finally losing their first match at Tchaker stadium, Algeria will now move on from the rickety venue and host matches at the new Olympic Stadium in Oran, 400 kilometres west of Algiers.

The all-purpose stadium was built to host the 2021 Mediterranean Games which will take place later this summer.

Whether Belmadi can weather a storm of his own making and be present when the Nations Cup campaign begins remains to be seen.