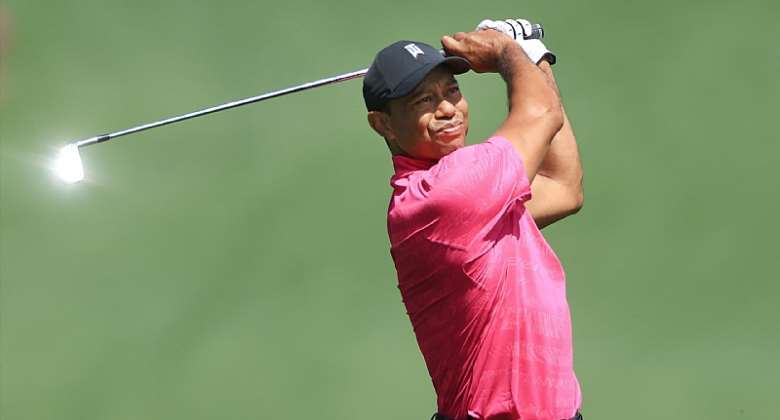 Tiger Woods said he was “lucky to be alive” after being involved in a horrific car crash and lying in his hospital bed, thoughts of returning to a golf course, let alone at the Masters, seemed a million miles away.

Yet, who would ever write off the man who has been the sport’s biggest superstar for so long? 14 months after that near-fatal accident, Woods strode boldly towards the first tee at Augusta, donning a bright fuchsia polo shirt and taking in the adoration of a crowd of thousands who gathered to see his return.

After a couple of gentle practice swings of his driver, Woods struck the ball from the tee to announce his quite sensational comeback to the sport. Although he would be the first to admit, given the circumstances, he was just happy to be back, that competitive spirit never leaves a champion and the grimace on his face from the first shot was clear to see. He had pushed it slightly right and was not best pleased, but he avoided the bunker and was off and running.

Along with his group of Louis Oosthuizen and Joaquin Niemann, Woods made his way down to the green where, as we’ve seen time and time over the years, he had beady eyes watching his every move. He approached his ball, ten feet from the hole, and put beautifully for par on the first.

He proceeded to make par on the subsequent three holes, and Woods looked comfortable to be back amongst the action, if only with a slight limp when walking. The five-time Masters' winner approached the fifth knowing he had not sunk a birdie on that hole since 2005. This time, he came so close but the ball circled the lip of the hole but would not drop. He had to settle for par once more.

Onto the sixth, where the magic of Tiger came to the fore and the crowd at Augusta was left in raptures as he did finally card a birdie. Woods stepped up to the tee, taking a short iron to the ball and landing it within two feet of the pin, before a simple putt home. Incredible.

Even after a loose drive saw Woods fly into the trees on the seventh, he recovered to punch the ball out to in front of the bunker, chip onto the green and putt for par. He certainly was not looking like someone who had been out of the game for so long.

The 46-year-old was clearly enjoying himself on his return, attacking the course with the same determination to succeed as the 21-year-old who triumphed in Georgia in 1997. So much so that Woods was forced to slow down at the eighth, with the group ahead - Bryson DeChambeau and Cameron Smith - yet to clear the green. Maybe he could say the delay made him lose momentum, as he only managed a bogey despite reaching the right of the green in two.

Woods started to struggle with his short game and the television cameras picked up on his frustration as he swore out loud. However, he still managed to finish the ninth with a par, meaning he’d go onto the back nine at even.

Still remaining level par, Woods took to the 12th tee to rapturous applause from yet another crowd who had gathered to greet him. The composure that had briefly left him appeared to be back, and he made short work of making par once more.

The 13th hole at Augusta is historically known as the easiest on the course, and Woods had the chance to card an eagle, but his putt fell short, so had to settle for a birdie which took him to one-under for the round. However, he was soon back to level par after some sloppy approach play left him with a bogey on the 14th.

Woods’ body was showing signs of fatigue as he weaved through hordes of patrons to collect his wayward approach on the 15th, before striking delightfully to the green and two-putting his way to par.

A birdie at the 16th left Woods one-under-par with two holes remaining, while par on the 17th left him one hole away from a very satisfactory return.

His final drive of the round took Woods deep into the trees but, once again, he recovered expertly to putt for par and ensure he finished the first round with a score of 71. His playing group suffered a mixed bag, with Niemann excelling to shoot a three-under-par 69, while Oosthuizen finished three over.

Flashes of brilliance, a more than respectable opening round and most importantly, few signs of physical discomfort will leave Woods delighted with his decision to return, and judging by the numbers following him round Augusta, so too are fans of the sport.