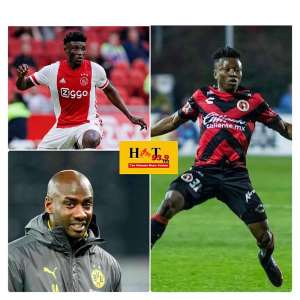 Borussia Dortmund assistant coach Otto Addo is eyeing former Captain of the Ghana U-20 team Clifford Aboagye as a backup for Ajax midfielder Muhammed Kudus if he is retained as Ghana's coach for the 2022 FiFA World Cup in Qatar.

The 46-year-old Otto Addo guided the Black Stars to the 2022 World Cup on the away goal rule at the expense of their regional rivals Nigeria as an interim coach. The four-time African champions forced a 1-1 draw against the Super Eagles at the Moshood Abiola Stadium in Abuja on 25th March,2022.

The Black Stars have been drawn in Group H alongside European giants Portugal, former World champions Uruguay and South Korea. Ghana were eliminated from the World Cup in their last two participations by Uruguay and Portugal in 2010 and 2014 respectively.

Reports reaching Hotfmghana.com from the technical team of the Black Stars indicate that, Otto Addo is looking at making Clifford Aboagye a backup to Muhammed Kudus who happens to be the only typical dribbler in the Black Stars team if retained as the Coach.

According to our source, Clifford Aboagye who is an agile-attacking midfielder and a playmaker with good dribbling skills and excellent technique would be a perfect fit to help the team mesmerize opposing teams at the Football Mundial.

At the 2013 FIFA Youth Championship in Turkey awaited him as the Black Satellites lost their first two games, unfazed by the atmosphere, Clifford Aboagye screwed his head on firmly, picked himself up and a series of solid displays which helped the team win bronze at the end of the tournament.

Significantly, his excellent display also earned him the bronze Ball award as the third most outstanding player falling behind only to French whiz kid Paul Pogba and Uruguayan prodigy Nicolas Lopez.

Currently, Clifford Aboagye, plays for Liga MX club Puebla on loan from Atlas as an attacking midfielder in Mexico. The product of Train Like A Pro Gh fitness Centre at Nungua in Accra, is considered as one of the best players in the MX league.