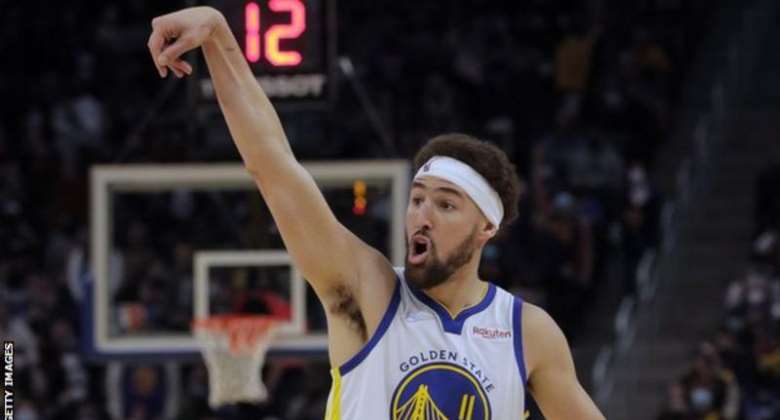 Klay Thompson moved past 12,000 career points during his return

Klay Thompson returned from a 31-month injury absence to help the Golden State Warriors secure a 96-82 win over the Cleveland Cavaliers.

Thompson, 31, tore the anterior cruciate ligament in his left knee in 2019, before tearing his right Achilles tendon during his recovery.

Thompson scored the Warriors' first basket of the game and hit seven of his 18 shot attempts, including making three three-pointers.

Warriors star Stephen Curry hit 28 points as his side hit back from two consecutive defeats.

They are now tied with Western Conference rivals the Phoenix Suns for the best record in the NBA on 30 wins and nine defeats.

Thompson last played in game six of the NBA Finals in June 2019, when he tore his ACL against eventual champions the Toronto Raptors.

He then tore his Achilles in training in November 2020 and missed the whole of last season and most of the first half of the current campaign.

Thompson's teammates all warmed up in various versions of his number 11 jersey to celebrate his return, before his arrival on the court was greeted by a huge roar from the home fans.

"I got a lot of old feelings again about game days - it was surreal," he said.

"The ovation to start the game, I just am so grateful for these fans. It was special."

The Brooklyn Nets beat the San Antonio Spurs 121-119 in overtime, with rookie Cam Thomas hitting the game-winner with 1.7 seconds remaining in the first overtime period.

Kyle Kuzma hit 27 points and made a career-high 22 rebounds in the Washington Wizards' 102-100 win over the Orlanado Magic.

Reigning Most Valuable Player Nikola Jokic made 22 points, 18 rebounds and six assists to lead the Denver Nuggets to a 99-95 win over the Oklahoma City Thunder.

Karl-Anthony Towns hit 40 points as the Minnesota Timberwolves recorded their fourth consecutive win with a comfortable 141-123 victory over the Houston Rockets.