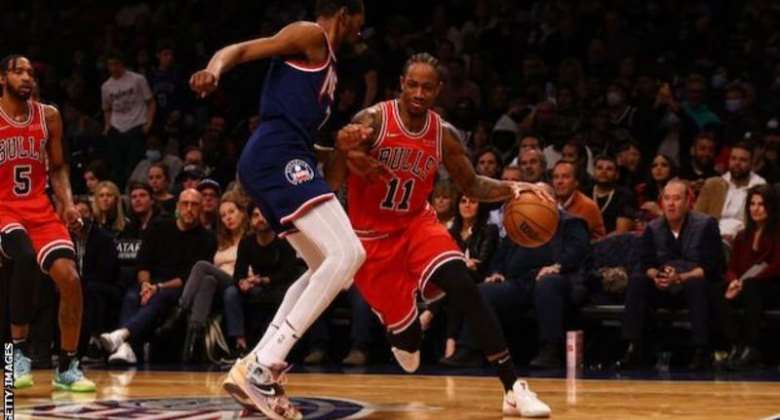 DeMar DeRozan scored 13 of his 29 points in the final quarter as the Chicago Bulls edged to a 111-107 win over the Brooklyn Nets.

In the battle of the Eastern Conference's top two sides, the Bulls' Zach LaVine top-scored with 31 points.

But it was team-mate DeRozan who inspired the Bulls to their second win over the Nets this season, making six of 11 shots in the fourth period.

He has now scored a league-leading 178 points in final quarters this season.

Kevin Durant led conference leaders the Nets with 28 points and 10 rebounds to move up to 24th - past Hall of Famer Ray Allen - on the NBA's all-time scoring list.

Derrick White scored a late three-pointer and three free throws to help the Spurs hold off the Warriors, who after facing a nine-point deficit at half-time, clawed their way back into the game with a third-quarter flurry inspired by Stephen Curry.

Nikola Jokic scored 32 points and added 11 rebounds as the Denver Nuggets cruised past the New York Knicks 113-99 for only their third win in 10 games.

The Milwaukee Bucks won their seventh straight home game with a 124-102 victory over the Miami Heat, while there was a dominant win too for the Boston Celtics, who schooled the Portland Trail Blazers 145-117.

In Saturday's other fixtures, the Memphis Grizzlies beat the Dallas Mavericks 97-90, and the Sacramento Kings defeated the Los Angeles Clippers 104-99.