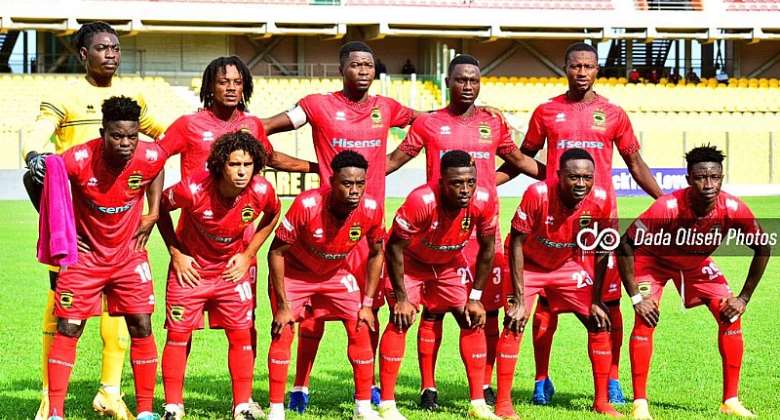 Kumasi Asante Kotoko are on a perfect run so far in the league, they have won all their four league matches, the first in many years one could remember. In fact, their invincibility appear to suggest they are unbeatable.

The Porcupine Warriors have 12 points and atop the ladder, three more than second-place King Faisal and four more than Olympics. This may be the happiest start for the fans who are mostly impatient and demanding.

This success is primarily down to head coach Prosper Narteh Ogum and fabulous attacker Isaac Oppong. The latter has scored in all but one of the four matches played so far.

He has dealt opponents a blow at the last minute and came in handy for Kotoko before the whistle blows for the close of the match. Against Dreams FC, his 89th-minute strike sounded the death knell for the Dawu based club.

His strike for Kotoko at home in the 77th minute against Eleven Wonders sealed the fate of the visitors. Nicknamed ‘Sunyani Nyemar’ the lad from Division 2 side Sunyani Bectero FC

His services will be much needed on Sunday when they trek to the Crosby Awuah Memorial Park to face ninth place Karela United in a duel that has soo much importance for the home side.

Karela have five points from four matches and is just three points away from the bottom. Coach Bismark Kobby Mensah charges have drawn twice, won once and lost against Medeama in the Tarkwa derby.

Against Kotoko, it is going to be a huge mountain to climb. Karela have a very porous defence and a weak attack, the Tarkwa based club have conceded five goals in four matches while scoring only three in all four matches.

Coach Koby Mensah must thinker away with his tactical approach if he is to make any meaningful gains against a robust Kotoko side. Defenders Rasheed Seidu, Emmanuel Anaful and Kwadwo Addae must create a water-tight defence.

While the attacking trio of Darlington Gyanfosu, Abdul Dogo and Umar Bashiru must have a sharp scoring boot to find the back of the net with the least opportunity.

If these permutations don’t fall in place, then a marauding Kotoko side, who are on the prowl will make minced meat out of them at their back yard.

Despite their poor form, Karela are yet to lose at home, and the fortress of CAMP still remain intact. However, last season Kotoko beat them 1-0 at the CAMP; will it be a repeat or revenge, it is expected to be a cracker on Sunday.

Before this cagey encounter, On Friday afternoon, Legon Cities will welcome Aduana Stars to the Accra Stadium while on Saturday the Sogakope Park will take centre stage when WAFA host visiting Accra Great Olympics.

Then on Sunday Dreams FC will trek to Bechem United to the Nana Fosu Gyeabour Park to face Bechem United and Kumasi King Faisal take on Medeama SC at the Baba Yara Stadium.

At the Ohene Ameyaw Park in Sunyani, Elmina Sharks will be the guests of Eleven Wonders while Real Tamale United play Ashantigold at the Tamale Sports Stadium also on Sunday.

At the Bibiani Dun’s Park on Sunday, Bibiani GoldStars will meet Accra Lions in a dicey duel.