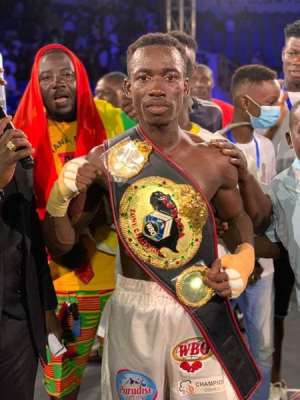 Speaking to Yours Truly in an exclusive interview at the Bronx Gym at James Town, he said there is no one else to win the prestigious award than him.

He commended his coaches and management for helping him to come very far in the game and wants to win to pave way for more glories.

“I am the WBO Africa champion and when it comes to the Global am number one. I beat a champion to win the title and I think I have worked very hard this year.

I want to appeal to all the SWAG members to vote for me to win. This is my time” he expressed.

His trainer, Carl Lokko said he deserves it because he stopped a tough boxer from Namibia to win the African title, and their target, for now, is the World or Commonwealth titles.

“Abaja must win, everybody thinks he must win, but a lot will depend on the voting by the sports journalists and I plead with them to look at the records and vote for us, we have already done a flyer to support SWAG with the awareness on the awards, and we must be recognized,” he said.