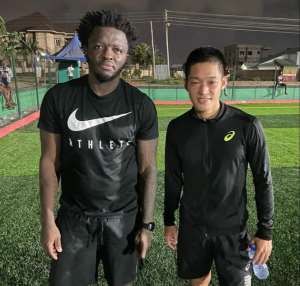 Ebusua Dwarfs striker, Jindo Morishita has been spotted training with Sulley Muntari ahead of the 2021/22 Division One League.

The Japanese forward joined the Cape Coast-based club in March this year after signing a deal until the end of that season.

Despite the club relegation to the lower tie, the Japanese striker has extended his stay at the club ahead of the new season.

The 26-year-old will be playing for Dwarfs in the upcoming Division One League and has been training hard ahead of the season.