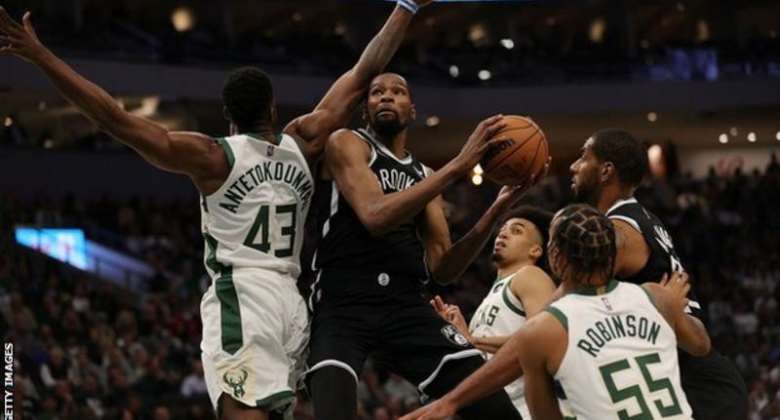 Reigning NBA champions the Milwaukee Bucks crushed the Brooklyn Nets 127-104 on the opening night of the league's 75th anniversary season.

Giannis Antetokounmpo, who was the most valuable player in last season's finals, contributed 32 points and 14 rebounds for the Bucks against one of the pre-season favourites.

A sold-out crowd packed into the Fiserv Forum Arena as the Bucks unveiled their championship banner and celebrated their first title win in 50 years before the game.

"It was hard, we all were excited to get the rings, and seeing our banner," Antetokounmpo said.

"It's kind of hard to balance that, to go from that excitement and emotional state to go and play a game.

"But I think we did a great job. We were able to focus on our game plan and ourselves and get a win."

The Bucks defeated the Phoenix Suns in July to be crowned NBA champions for the first time since 1971.

Kevin Durrant was Brooklyn's top scorer with 32 points, but the Nets were without point guard Kyrie Irving who refuses to get a Covid-19 vaccine.

On the west coast, the Warriors, led by a 21-point, 10-assist and 10-rebound triple-double from Steph Curry, came from behind to beat the 2020 champions.

"This is a good feeling," Curry said. "We had a lot of excitement coming into this season -- a new cast of characters mixed with our core.

"We weathered the storm. I played like trash -- shot the ball terribly -- but if we can win a game like that where we just stuck with it defensively, it's a good omen for us."

Russell Westbrook, who was making his competitive Lakers debut, was limited to eight points, five rebounds and four assists.

"We're going to be pretty good if we get those type of performances," said Vogel. "We just have to be better defensively.

"This is a team which is all new to each other. Everyone is finding their way a little bit, and each day they're getting a little bit better."