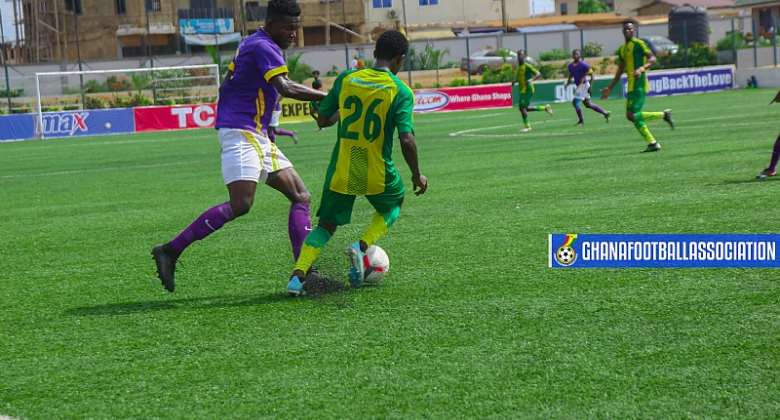 Tema Youth and Skyy FC have progressed to the semi-final of the ongoing Division One League Super Cup after fighting for a 1-1 stalemate at the Madina AstroTurf on Sunday.

The two teams went into the game knowing that a draw will see them through to the next round and dug deep for the result. The Harbour Warriors led the table with 6 points prior to the game with the latter sitting in second place with 4 points after an opening day draw and a win against Bibiani Gold Stars.

Ebenezer Mamatah opened the scoring for Skyy FC in the 3rd minute but Tema Youth equalized in the second half to salvage a point.

Tema Youth kept a well-disciplined display in the first two matches when they won two and conceded non – keeping a 100% record in the competition.

In the other Group A game, Bofokawa Tano beat Bibiani Gold Stars 2-1 to win their first game in the championship but that wasn’t enough to take them through to the next round as they bow out with pride.

The competition continues on Monday – ]and in Group B - Accra Lions will clash with Real Tamale United in a battle of two newly-promoted Premier League sides at the McDan Park while Samartex hosts Berekum Arsenal at the Madina Astro Turf.

The matches which are scheduled for 2pm kick-off will be live on Max TV, StarTimes Adepa channel 247 and the GFA App.