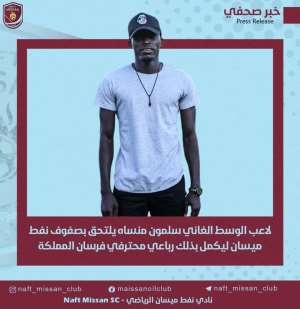 The defensive midfielder inked down a year deal with the Kingdom Knights after ending his two-year stint with now relegated Egyptian Premier League outfit Aswan SC.

Solomon in his successful stay with the Egyptian side made a total of 40 appearances and assisted twice for the Nile Crocodiles.

He was an integral in the 2018/2019 season for Lebanese side Shabab Al Sahel, where he played 13 times and aided them to the Lebanese Elite Cup in 2019.

Mensah was also a member of Bechem United’s MTN FA Cup triumph in 2016.