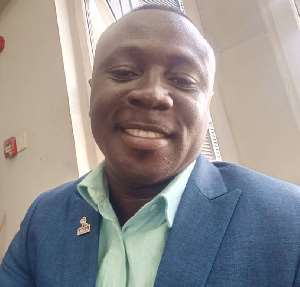 The head coach of the senior national hockey team, Ebenezer Frimpong has urged the Ghana Hockey Association to organize friendly competitions for his side.

He made the statement at an engagement with the players during the official test match on the newly reconstructed turf at the Theodosia Okoh hockey stadium.

He stated that engaging in highly competitive matches would enable the players to develop enough experiences before any major tournament.

"We need to get them more competitions and that has been one major challenge that hockey is having, in terms of West Africa there seems to be to much gap in between.

"Our last competition was in 2019, you sit down for two years, everything that the players have acquired now goes down the drain. These are the little things we need to do so, get them enough competitions, let them be more Competition readiness," he stated.

He, however, advised the players to set personal targets and ambitions that would propel them into the future.

"As a player, you need to set individual goals, the team has a goal but they need to set their goals to make you a better person, these are the little things we need to work off the field," coach Ebenezer Frimpong said.

The experienced and tactical head coach who doubles as the Sports Director of the Ghana Revenue Authority GRA, has also named a 42 man squad to begin camping ahead of the Africa Cup of Nations next year January at the Theodosia Okoh hockey stadium.

'Breaking the 8': Party needs fresh executives in Ashanti re...
30 minutes ago

NPP Regional elections: Be vigilant, NDC is sponsoring some ...
48 minutes ago