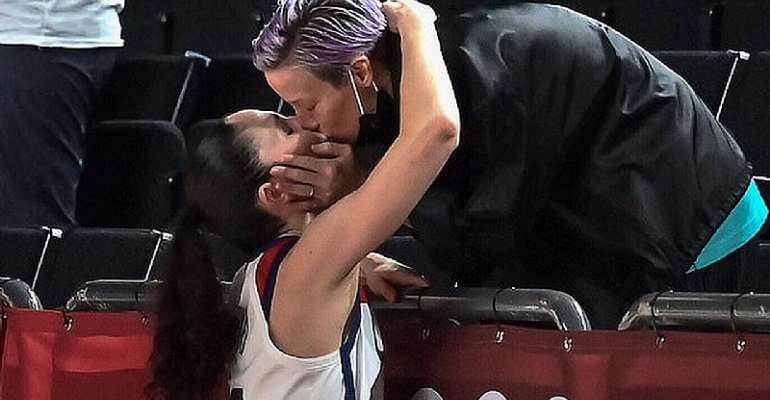 Women's basketball captain Sue Bird shared a kiss with her soccer great fiancée Megan Rapinoe after the US led her team to gold against hosts Japan in Tokyo.

Bird secured her status as an Olympic great and capped off her unblemished 17-year run with a record fifth gold medal.

America's women have now landed the gold in basketball at seven straight Olympics.

And it was a double basketball gold in Tokyo, with the win coming a day after the men's team also became Olympic champions.

Led by captain Bird, America demolished the challenge from Japan 90-75. Apart from the final quarter when Japan shaded it by 19-15, the US led in the other three periods.

Bird announced her Olympic retirement after winning in Tokyo and said she hoped she had left a legacy fort younger players to follow.

She said: 'Those older players taught us what it meant and for us hopefully we have left some sort of legacy with the younger players and they can now carry that torch.

'So to be sitting here now after going through 20 years of that, It is amazing.

'And this is my last one and no one has to ask about it anymore.'

Bird, 40, celebrated with the American flag with team mates as they proved once again that the US women own the basketball at the Olympics.

Diana Taurasi of Glendale, CA, also landed her fifth gold. She said: ' What can you say? It's 20 years of sacrifice, putting everything aside and just wanting to win.

'It's never easy pan on this team with the pressure, but this group found a way to win and I'm just happy this group got to enjoy it.'

While Bird is finished, Taurasi said that she'll be back for a sixth Olympics.

'See you in Paris!,' Taurasi said.
Brittney Griner, 30, of Houston, TX, won her second gold and she paid tribute to the American women who preceded her and proved triumphant.

She said: 'Seven in a row, I mean that's just amazing. That just goes to show everything the USA basketball is about.

'Japan's hard to guard. They can shoot it anywhere on the court. They are a tough guard, they're really good team.

'I'm just glad we got this gold.'
The Americans are on a 55-game Olympic winning streak dating back to the bronze medal game of the 1992 Barcelona Games.

The U.S. let Japan know that wasn´t going to change on Sunday.

The Americans jumped out to a 18-5 lead behind a dominant first quarter by Brittney Griner. The team lead 23-14 after one as Griner had 10 points, taking advantage of the undersized Japanese team.

Japan was able to get within six in the second quarter before the Americans went up 11 at the half and never looked back.

As the final buzzer sounded, Bird and Taurasi embraced and then proceeded to hug all of their teammates and the coaching staff.

While Bird has said she is moving on, the future is bright for the U.S. behind Griner, Breanna Stewart and the six newcomers on this year´s team.

That included A´ja Wilson, who will be counted on to keep the streak going three years from now at the 2024 Paris Games.

Wilson, who celebrated her 25th birthday on Sunday, made her presence felt in her Olympic debut, scoring 19 points in the gold medal game.

But there were other milestones of note Sunday besides Bird´s farewell.

The victory also made Dawn Staley, the first Black women's basketball coach for the U.S., the second woman to win a gold medal as a player, assistant and head coach joining Anne Donovan.

The game also marked the end of Carol Callan's run as the national team director. She started right before the Americans won the first gold of this streak in 1996 and has been the architect for this unprecedented run.

Japan, which was the only one of the 11 other teams to ever have beaten the U.S. in an Olympics, won a medal for the first time in the country's history. The team's best finish before Sunday was fifth.

The host nation has been on the rise since it hired coach Tom Hovasse. He said when he got the job 4 1/2 years ago that his team would be playing against the U.S. for the gold at the Tokyo Games - and would beat them.

He was half right.
The two teams met in preliminary pool play and the U.S. won by 17 points after trailing by two after the first quarter. Just like that game, the Americans used their dominant post advantage to control the title game. Japan's biggest player was 6-foot-1 - no match for the imposing front line led by Griner, who is 6-9.

While the general public and family members couldn't attend the games because of the coronavirus pandemic, Bird did have fiancee Megan Rapinoe in the stands cheering her on. Bird came over and embraced Rapinoe after the game. She helped the U.S. women's soccer team win a bronze medal earlier this week, scoring two goals in that game.

A large contingent of Japanese volunteers, who had been in the Saitama Super Arena for the entire tournament sat and applauded their team. No actual cheering was allowed because of the coronavirus pandemic.