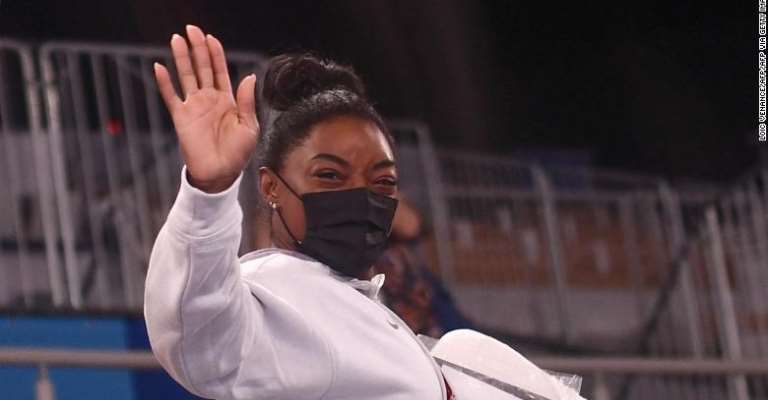 Simone Biles will not compete in the Olympics finals for two of the four individual women's gymnastics events, vault and the uneven bars, USA Gymnastics said.

Biles, arguably the world's greatest gymnast, has pulled back from Olympic competition in Tokyo to focus on her mental health. The 24-year-old explained in a series of Instagram posts that she has the twisties, a mental block in gymnastics in which competitors lose track of their positioning midair.

"After further consultation with medical staff, Simone Biles has decided to withdraw from the event finals for vault and the uneven bars," USA Gymnastics said in a statement on Twitter.

"She will continue to be evaluated daily to determine whether to compete in the finals for floor exercise and balance beam."

The women's vault and bars finals are scheduled for Sunday, the women's floor final is Monday, and the beam final is Tuesday.

MyKayla Skinner, who had the fourth-highest score in vault during qualifications, will compete in the vault finals for the US alongside Jade Carey, who finished with the second-highest score, according to USA Gymnastics.

"We remain in awe of Simone, who continues to handle this situation with courage and grace, and all of the athletes who have stepped up during these unexpected circumstances," the statement added.

Biles first stepped away during the women's gymnastics team final on Tuesday, citing mental health concerns as she attempts to protect "her body and mind."

Following USA Gymnastics' announcement Saturday, Skinner said in a post on Instagram: "Looks like I get to put a competition Leo on just one more time. Can't wait to compete in vault finals."

Ranked behind Biles and Carey in the qualification round, Skinner initially didn't advance to the vault final because of the two-athlete-per-country limit. She had thought her career as a competitive gymnast was over.

Skinner said she was "doing this for us," tagging Biles in the Instagram post. "It's go time baby!" she added.

In a series of Instagram stories on Friday, Simone Biles shared videos -- which have since been deleted -- of herself struggling with her dismounts on the uneven bars and answering questions about having the twisties.

Biles said her recent bout of the twisties began the morning after the preliminary competition. She said she'd been affected by it before, saying in a post, "btw it's never transferred to bars & beam for me. It strictly likes floor & vault." Then she added, "but this time it's literally on every event. which sucks... really bad."

In two of those now-deleted videos, Biles could be seen struggling with dismounts on the uneven bars.

In the first video, she says she was supposed to perform one-and-a-half more twists on her dismount. Instead, the video shows her landing on her back on the mat.

A separate video shows another dismount, in which she said she still needed to complete another half twist, and she falls to the mat in apparent frustration.

She said the videos were taken Friday morning at practice. In another post, she added, "it's honestly petrifying trying to do a skill but not having your mind & body in sync."

Biles said getting rid of the twisties "varies with time" and for her usually last two or more weeks, adding it's "something you have to take literally day by day, turn by turn."

In an emotional interview after Tuesday's team final, Biles broke down in tears as she explained her decision, putting the issue of mental health front and centre of the 2020 Olympics.

"Whenever you get in a high-stress situation, you kind of freak out," Biles told reporters on Tuesday. "I have to focus on my mental health and not jeopardize my health and well-being.

"It just sucks when you're fighting with your own head."

Earlier that day, Naomi Osaka -- who has also talked openly about her own mental health struggles -- was knocked out of the Olympic women's tennis tournament.