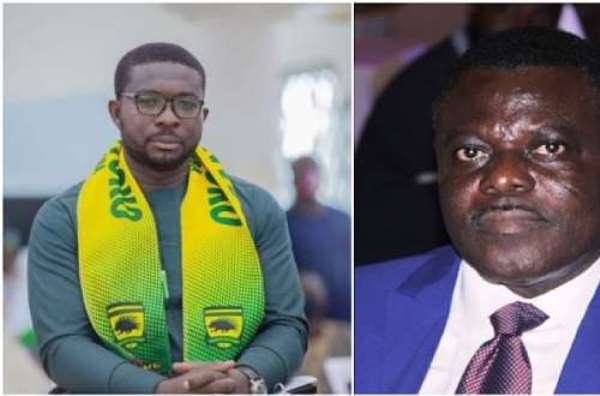 The Porcupine Warriors finished the 2020/21 football season at the 2nd position with 57 points, losing the title to the bitterest rivals, Hearts of Oak.

Kotoko also failed to defend the MTN FA Cup exiting at the quarterfinal stage against Berekum Chelsea at the Obuasi Len Clay Stadium.

Mariano Barreto's side lost 4-5 on penalty shootout after Wahab Adams failed to convert his spot-kick.

However, it was repeatedly reported that Dr Kyei, who is the Board Chairman of the club and Nana Yaw Amponsah, who is the Chief Executive Officer of the club were having a rocky relationship.

And according to Jarvis, the impasse affected the club's chances of winning the Premier League and the FA Cup.

"Nana Yaw Amponsah got goodwill from the onset from the supporters but unfortunately, we couldn't carry on to the end of the season," he told Kumasi based Hello FM.

"And the sour relationship between the board chairman and the CEO which was all over radio was very bad.

"The way the board chairman's radio station attacks Kotoko CEO is not good. It's part of the reasons why we failed to win the league.

"At a point, I think Nana Yaw Amponsah too didn't behave well. If you have a misunderstanding with your board chairman he shouldn't have left it like that. He failed to control his ego. Because we should know how to manage egos.

"I kept asking myself what was going on because I felt we have a lot of people in Kumasi who could have helped solve the issue.

He continued, "What was the use of the board? The board chairman's radio station consistently insult the team's CEO but I didn't hear of any release from the board to condemn it.

"I didn't see the board warning the CEO not to grant an interview about the matter neither did they talk to the board chairman to stop his workers from attacking the CEO of the club on air.

"I believe that the board of directors didn't do well at all. I'm surprised they failed to solve this row between the two. It has cost us the league and FA Cup.

"The success of Kotoko is not about the ongoing development at Adako Jachie and selling at the market to generate money for the club.

"If we do all these but fail to win trophies that's not Kotoko," he added.