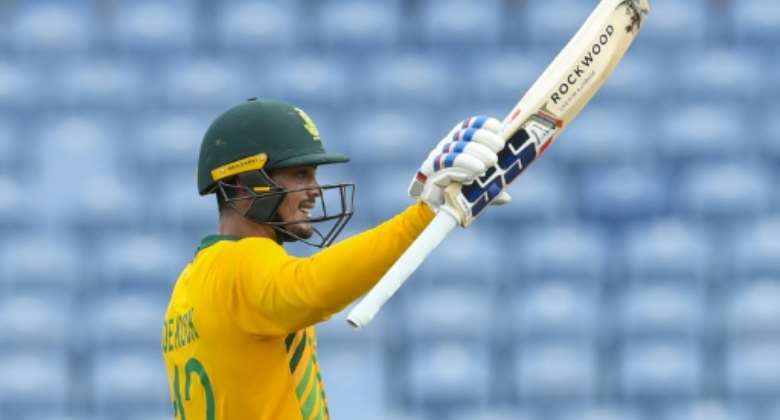 South African batsman Quinton de Kock celebrates his half century during the final T20 international against the West Indies on Saturday. By Randy Brooks (AFP)

Aiden Markram's highest T20 International score and another half-century from the consistent Quinton de Kock paced South Africa to 168 for four batting first against the West Indies in the decisive fifth and final match of their series at the National Cricket Stadium in Grenada on Saturday.

Markram's 70 off 48 balls with four sixes and three fours came as he and de Kock (60 off 42 balls with two sixes and four fours) put on 128 for the second wicket after their captain, Temba Bavuma, fell without scoring in the first over of the match bowled by Fidel Edwards.

That partnership was the highest for any wicket by South Africa in T20 Internationals against the West Indies.

Bavuma had chosen to bat first on winning the toss, the first time a captain opted to do so in this series.

It was a decision no doubt influenced by the tourists' failure to chase a target of 168 in the previous fixture two days earlier, a result which allowed the home side to pull level at 2-2 and set up the finale as a series decider.

Despite the excellent platform provided by Markram and de Kock though, the innings lost momentum over the final 10 overs, especially when Edwards separated the pair by having de Kock, who tallied 256 runs in five innings in the series, caught by Andre Russell at long-on.

Edwards' figures of two for 19 were the best for the West Indies bowlers with captain Kieron Pollard using seven bowling options, including himself, on a pitch where run-scoring was again increasingly difficult as the innings wore on.

Obed McCoy, who lacked the control of earlier matches, accounted for Markram while Dwayne Bravo, 'Man of the Match' with career-best T20I figures of four for 19 in the fourth match two days earlier, had Rassie van der Dussen caught and bowled.

With West Indies all-rounder Fabian Allen sidelined by a shoulder injury sustained in the field on Tuesday, his place was taken by Akeal Hosein, who also bowls left-arm orthodox spin. Hosein bowled two overs for 24 runs in his T20 international debut.

South Africa also had an injury concern going into the match with pace bowler Anrich Nortje resting a bruised knee.

Mindful of the spin-friendly conditions in the previous matches, the Proteas drafted in another left-arm spinner, Bjorn Fortuin, in place of Nortje while their batting line-up was adjusted with opening batsman Reeza Hendricks dropped and all-rounder Wiaan Mulder coming into the middle-order.