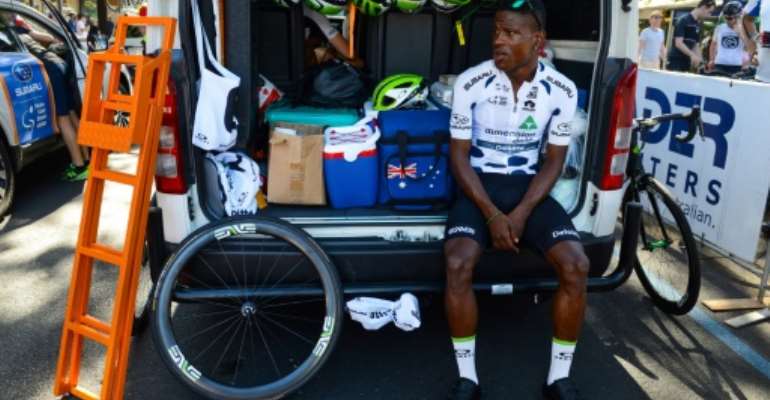 Nicholas Dlamini has come a long way from his township childhood and says his mission is to inspire youngsters back home. By BRENTON EDWARDS (AFP/File)

South Africa's Nic Dlamini set off on cycling's Tour de France on Saturday, a long way from the township of his childhood and hoping his odyssey inspires youngsters growing up in similarly modest circumstances to reject gun crime.

Dlamini says there was an outpouring of joy when he was selected for the Tokyo Olympics that was redoubled when news came he'd be taking part in the world's greatest bike race, the first black South African to do so.

His status in South Africa is such that Dlamini had a surprise call of congratulation from Springboks' Rugby World Cup winning captain Siya Kolisi.

"I wasn't going to sleep much tonight anyway, but that was the highlight of my day," explained Dlamini, whose sports director later said: 'Nic is the Siya Kolisi of cycling in Africa'."

The 25-year-old may have left South Africa in his late teens for the chic Italian town of Luca, but he insists his thoughts will be with the Capricorn Park township kids who support him as he pedals his way around France over the next month.

"In the township itself, you'd be well known for owning a gun," he told AFP of his roots in Capetown.

"You'd be more respected for owning a gun or shooting someone. It's a place where doing the wrong things gets you up there.

"Growing up you'd see from a young age that the kids wanted to get involved in gangsterism because they see everyone looks up to the gangsters."

Dlamini says his ascent to professional sport is helping change that attitude.

He may also be something of a role model for having stood up to rangers in 2019, who broke his arm in a scuffle over an alleged non-payment of an entry fee to where he was cycling.

Dlamini's own role model is South African trail-runner Ryan Sandes, who tried to persuade him to pursue a career in athletics.

"Cycling had become almost part of my backbone by then," he says of a decision that now seems to be the right one.

"My first bike was a re-spray, but I swear at the time it looked like the nicest bike I'd ever seen," Dlamini told AFP at his team hotel in Brittany.

South Africa's Nicholas Dlamini, who competed for Team Dimension Data at the 2018 Tour Down Under, says if he can make a name for himself it will prove to young people back home that "anything is possible". By BRENTON EDWARDS (AFP/File)

"If you grow up in a township you are sort of like living in a box, you don't get to go out and see nicer things. So I thought my bike was really nice," he smiles.

He was soon in a sports club and spent time away from Capricorn in the extended summer holidays during the 2010 World Cup in South Africa.

"Lots of good memories from back then," said Dlamini, who would soon move on to Luca and then to Girona in Catalonia after he graduated to Qhubeka's World Tour team a few years ago.

"My mum (Gloria Zalani) is super proud and obviously the rest of my family are too. I have a five-month-old son and a wife and I wish they could be here with me," he says.

"Especially on Mandela Day in Paris," he added of July 18 which is also the date of the Tour's finish this year.

Our members are dying, pay us – Contractors lament
39 minutes ago