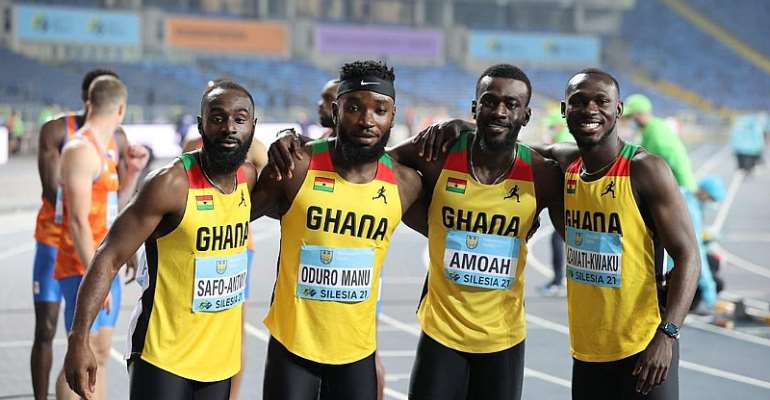 Ghana’s 4x100 metres Men’s Relay team have booked their place at this summer’s Olympic Games after they finished second in their heat at the World Athletics Relay staged in the Silesian Stadium, Chorzów, Poland.

The President of the Ghana Olympic Committee Mr. Ben Nunoo Mensah wasted no time in sending a congratulatory message to the team describing them as "gallant athletes and Ambassadors of Ghana".

The Minister for Youth and Sports Mr. Mustapha Ussif has also conveyed his message on behalf of the President and the Sports Ministry.

Ghana's Men Quartet made up of Sean Sarfo-Antwi, Benjamin Azamati-Kwaku, Joseph Oduro Manu and Joseph Paul Amoah finished second with an impressive time of 38.79 seconds behind the Dutch who clocked 38.79 with 782 M/Seconds.

Meanwhile, the qualification success of the Men's quartet could not be replicated by their female colleagues unfortunately as Ghana finished fourth in the Women's 4x1 relay.

The ladies of Brazil and Italy booked their automatic slots in first and second places respectively. They were followed by Japan and Ghana. The athletes are expected to return to their bases in Europe and the US immediately after their events.