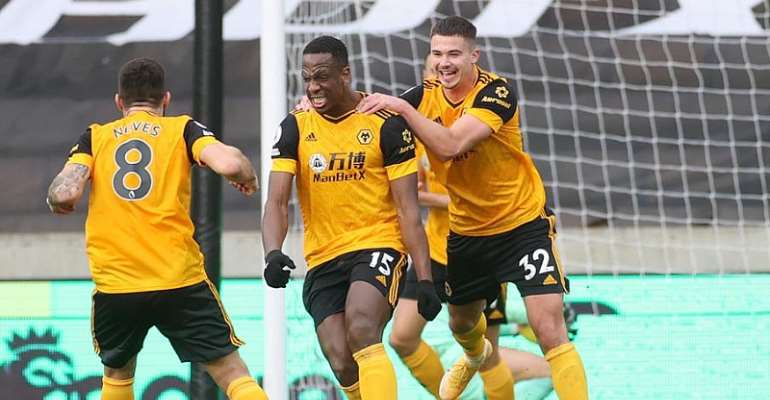 Ivory Coast defender Willy Boly conceded a penalty, created a goal, and scored for Wolves in a 3-2 defeat by West Brom at the weekend in the English Premier League.

The last Wolves player to match what Boly did at the Molineux was another African, Algerian Adlene Guedioura, in 2011 and West Brom were also the opponents then.

Here, AFP Sport rounds up the performances of African stars in the major European leagues:

WILLY BOLY (Wolves)
His foul on Callum Robinson conceded the penalty that gave Albion the lead. His deft backheel set up Fabio Silva's equaliser in the 38th minute and five minutes later he put Wolves ahead with a close-range finish after a corner was not cleared.

SERGE AURIER (Tottenham)
The Ivory Coast right-back scored his first goal since October to put Tottenham on course for a 3-1 away win against Sheffield United. Aurier netted his second goal of the season with a powerful header from Son Heung-min's fifth-minute corner.

MOHAMED SALAH (Liverpool)
The Egypt forward endured a frustrating time as Manchester United earned a 0-0 draw against Liverpool in the title-race showdown at Anfield. Salah was well marshalled by United left-back Luke Shaw and had few sights of goal in a scrappy clash.

SIMY (Crotone)
Nigerian Simy struck twice and had a role in another goal as rock-bottom Crotone beat midtable Benevento 4-1 in a clash of promoted sides. Forward Simy forced a Kamil Glik own goal in the fourth minute, doubled his side's account just before the half-hour mark and volleyed in a third nine minutes after the break to bring his Serie A goal tally to six this season.

KALIDOU KOULIBALY (Napoli)
Senegal defender Koulibaly returned after missing Napoli's last four league matches with a muscle injury and performed solidly in a 6-0 rout of Fiorentina that lifted his club to third. "Today, we had the right mentality and conceded nothing," said Koulibaly. "We need to continue like this, we have the potential to get back to being contenders."

SILAS WAMANGITUKA (VfB Stuttgart)
The Democratic Republic of Congo winger converted a last-gasp penalty to earn Stuttgart a 2-2 draw at home with Borussia Moenchengladbach. Wamangituka scored the 96th-minute spot-kick for his ninth Bundesliga goal in 16 games this season.

KARL TOKO EKAMBI (Lyon)
Cameroonian Ekambi had an unfortunate night during Lyon's 1-0 defeat by Metz which allowed Paris Saint-Germain to claim top spot in Ligue 1. He missed two presentable chances in the first half, then after thumping home what he thought was the opening goal in the 74th minute, he had to watch as his strike was ruled offside after a long VAR check.