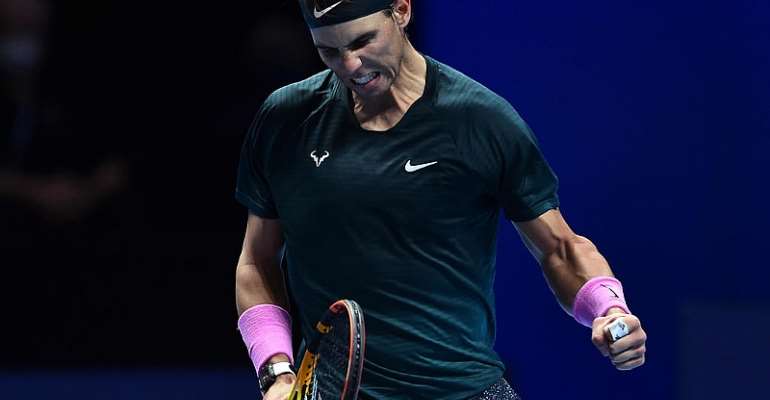 Second seed Rafael Nadal maintained his bid for a first ATP Finals title with a three set win over the defending champion Stefanos Tsitsipas at the 02 Arena in London.

The 34-year-old Spaniard dispatched the sixth seed 6-4, 4-6, 6-2 in just over two hours and will play fourth seed Danill Medvedev on Saturday for a place in Sunday's final.

However, unlike Federer, Nadal has never won the eight man end-of-season championships despite 16 consecutive appearances.

“In general terms a very positive match for me," said Nadal. "To be in the semi-finals here at the last tournament of the year is an important thing. I am happy for that and looking forward to the semi-finals against Daniil."

He added: "It's always difficult to play here against the best players of the world every single day. Most of the time you get here a little bit tired but this year is a little bit different."

Quest
Nadal won his opening round-robin match in Group London 2020 against eighth seed Andrey Rublev on Sunday. However a straight sets defeat to third seed Dominic Thiem meant he faced a shoot-out against 22-year-old Tsitsipas to reach the semi-finals.

Before Nadal's match against Tsitsipas, Thiem ended his campaign in Group London 2020 with defeat to Rublev.

"With the fact that I was already qualified in the back of my mind, it was maybe difficult to keep that intensity alive," said Thiem, who had clinched top spot in the pool following wins over Tsitsipas and Nadal.

In the semis, Thiem will play the winner of Friday's clash in Group Tokyo 1970. between top seed Novak Djokovic, who is seeking a record-equalling sixth title and the 2018 champion Alexander Zverev.