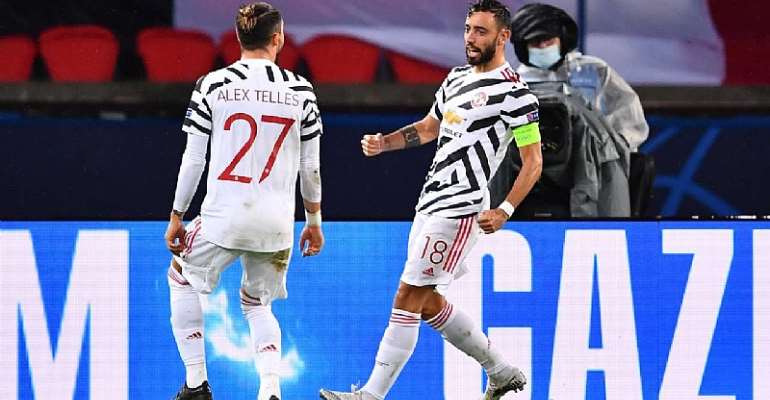 Midfielder Bruno Fernandes put up an outstanding performance on Tuesday night to help Manchester United kick off their campaign in this season’s Uefa Champions League with a win in Paris.

Although PSG enjoyed the better of possession throughout the 90 minutes of the star-studded game, Manchester United had the last laugh with the help of the brilliant Bruno Fernandes.

Just as in previous matches, the Portuguese orchestrated things in the middle of the Park as his other Red Devils teammates joined in with impressive performances to steer the team to victory.

On the matchday, Bruno Fernandes scored from the penalty spot in the 24th minute to hand the away team the lead. Although he missed the initial kick, he made amends on his second try after referee Antonio Mateu Lahoz called for a retake.

Lasting 88 minutes of today’s encounter, the midfield maestro and fan favourite earned the highest rating by any player from either team.

The 26-year old had 2 shots on target, made 5 successful tackles, and completed 1 dribble to merit a rating of 8.0 from Modernghana Sports partners, SofaScore.

After recess, Paris Saint-Germain displayed purposefulness and managed to draw level after pressured Antony Martial headed a cross into his own net from inside the 6-yard area.

Later with 3 minutes to end proceedings, English forward Marcus Rashford scored with a sumptuous strike from the edge of the box with an assist from Paul Pogba.

Up next for Manchester United in the Champions League, they will take on RB Leipzig on Matchday 2.